There have been a few bigger releases of some inserts lately, so here is the latest breakdown of those cards for everyone. These cards may have been skewed a bit by the black pack release yesterday as well, please keep that in mind, as it inflated card counts across the board.

Im sorry, but I cant help but feel bummed out that this isn’t David Price or at least Evan Longoria. So much opportunity missed, very similar to the Swisher sig for the Indians. Although I think the signature series cards will be valuable regardless of player choice, this one could have been big for the Rays. 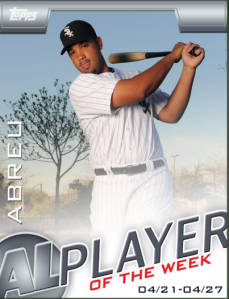 The reason I want to cover this card is because of how few cards Abreu has in the game, and the fact that this one plays at 3x boost for this week. That is big enough to put him in the starting lineup over a pitcher. Great card for a player that has nothing in the game makes this very collectable at the moment.

I am a huge fan of these cards, even though some of the pictures make the players quite unattractive. Outside of that, the player checklist includes a bunch of guys like Dexter Fowler and Eovaldi that do not have other cards in the game. Scherzer is the top card in the set now, but his value took a beating thanks to the black pack.

Solarte has become quite the phenomenon in New York and I know the Topps guys were looking for a way to get him in the game. This is a collectable card because of the Yankee fans out there, combined with the lack of available options. This was a good choice.

Im really liking the direction that Topps is taking this year with choosing their insert sets, and we have really seen some nice stuff so far. Its early, so we still have a lot of reason to believe that this is going to get that much better.