Posted on August 5, 2014 by SCUncensored

Because of volume, its hard for me to put together a piece on every Bunt set that is produced each week. On the other hand, Fired Up 2 is one of those sets I feel compelled to write about as it is a continuation of another set that maybe one of the best of 2014. 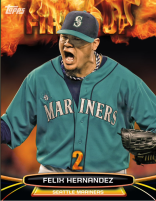 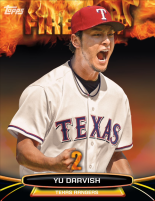 This set is special in a number of ways. Not only did it have a great checklist, based off the set from Topps Series One Baseball in real cards, but it was CRAZY rare. How rare you ask? Well, the average print run of each of the scarce cards was under 100, which is unheard of in today’s market.

Cards like David Wright and Hanley Ramirez were both 50 and under, while Verlander, Pedroia and Ellsbury were all 100 and under. Other parts of the set rarely crossed the 400 mark, which has no equivalent in a set of this kind.

Fired Up 2 WONT be as rare, at least from what I can tell, although it has 2 Super Rare cards that could end up being extremely limited. People will draw from their experience with collecting Fired Up 1, which could end up making these another valuable set to chase.

Topps also has a tendency to release black packs and other promos when sets dont have good circulation, however these rarely contain SR cards in them. That means, the lower rarity cards can creep up above 1000 in print runs, thus killing their value. That also means if you pull Trout SR or Felix SR Fired Up 2, you better get your money’s worth if you are trading.

Just to show you how insane the market is for these cards, I want to offer this picture. I opened about 100k worth of packs and pulled 3 of the cards, two rare and one uncommon. Here is the trade I was able to make:

Fired up is one of my favorite weekly sets, as I think it really captures the true raw emotion that Baseball rarely is allowed to display. For that set to come to Bunt is huge, and to have it twice is a treat. If you are going to spend real money in this game to buy packs of a weekly set – buy these. You wont be disappointed if you pull one.

This entry was posted in Reviews and Commentary and tagged Baseball Cards, Topps Bunt. Bookmark the permalink.