I love doing these posts when there are big cards that are released, and this week was one of the better release weeks in a while. Here is what is new this week, and I think that there will be a lot of people out looking. 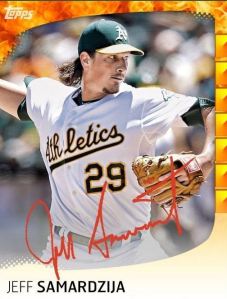 Adding 4x boosts to the card sheet should get points players salivating. Adding a 4x boost of a strikeout pitcher in the middle of a big year? Even better. This card is a beast for points, as all the 4x boosts are, and it is a bit more available at 300 copies than the other sig boosts. Really nice addition to this set.

REALLY timely sig release on this one, as Rizzo has been hotter than ever as of late. At 450 copies, he is below the 500 line that puts him among the top sigs of the year so far, and playing for a team with a lot of fans is going to make this card quite valuable. I was lucky enough to pull one in my first few packs, and my app crashed from getting so many offers at once within the first five minutes. Crazy.

This entry was posted in Gameplay Tips. Bookmark the permalink.