We all knew Bunt was going to be nuts last night. We knew that things were going to be built around whipping us into a frenzy over the big game, and I must say it ended up being one of those days you just walk away saying, “wow, that was awesome.” I spent close to 8 hours on Bunt yesterday according to my phone, most of it wheeling and dealing to get all the different sets done. After last night was over, im glad I spent all that effort. It was worth it.

If you havent seen the award cards, I want you to feast your eyes on these beasts.

Seriously though, these are some of the best looking cards of 2015 and Im not even kidding. Being that they used actual photos from the game itself is a treat, and even more impressive that they got the cards completed while everything else was going on.

I like that they chose to make relic cards for the main award, as it adds something special for the people that chased down all 76 of the base All Star cards. Even though they were one per pack, its still a feat.

Also worth mentioning that the base award had 1500+ recipients, which is insane to me. As mentioned prior, they were one per pack, but to think there were 1500 accounts that decided to take the plunge is insane to me. Hot year for all stars in 2015. 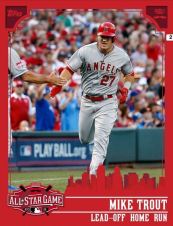 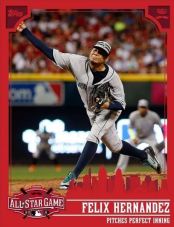 Im not sure if everyone understands how difficult it is to get live cards made and released. Im not sure if everyone understands how much more difficult it is to do live cards with photos that are being taken real time. Back during the NFL draft, Huddle was the first to try to make live cards, but the photos they had were already in existence. This is a similar concept, but its amazing to think that Bunt found a way to make their cards as the events were taking place, and boy were they cool.

The set of 8 cards are easily some of my favorite they made, and its because they commemorate the big moments of the day. Many of them will end up being pretty high in card count, but this is the first live set that Bunt has ever done, and they rocked it.

Say what you want about Variants, but these cards were hotter than hell. You couldnt scroll through a post in the feed without someone mentioning they wanted to get the ones they needed, and to see that the Trout ended up being ONLY 79 copies is pretty impressive. I like the Black Border variants almost a little better than the red, as there were so many sets that used that Border. These are rarer and have a lot more people looking for them.

Even the Derby Black Variants were highly sought after, even though everyone had already moved onto the main event. I had more requests for my dupes of the derby cards than I did for my ASG variants, which was interesting to see.

As we saw last year, Topps Digital Editor in Chief, Chris Vaccaro, is a photographer who loves to capture the essence of the events he attends. We had some cool fan fest type cards last year in Minnesota, and again during the HOF induction ceremony. All of these cards were and are pretty popular.

The oddities this year expanded out to the city itself, which was festively decorated in many ways for the game. At 1:10, these cards were pretty easy pulls, and that was a cool thing to get in packs while people were chasing the All Star Moments Cards.

These were a complete surprise. One that I have mixed feelings on. The reason I have mixed feelings is because the cards are so cool, and yet only one person will get to have them each in their collection. These cards would have made quite the set as a limited release, and Im disappointed that wasnt the case.

Verdict: Bunt Single With a Throwing Error That Allows the Runner To Go To Second Base, Scoring 1 Run In the Process

Overall, Bunt did a fantastic job all week so far, and we arent even done yet. The big release of the All Star sig SHOULD be today, and I am curious to see who it might be. Obviously, Trout, Frazier, Harper and some of the other big names have already had cards, could this be Aroldis Chapman’s time to shine? His performance yesterday was AWESOME.