The day we have been waitng for since the app launched is here. The Force Awakens hits theaters officially today, with showings every last minute all day long. For many Star Wars fans, this is the point in their fandom where everything becomes surreal, and for SWCT fans, its a day that will live in our memories for as long as we are part of the app.

At 12:01 yesterday, the first set was released in SWCT concept art, and as expected, the set look really, really good. It features the type of stuff that we love, mainly that there are no publicity stills that are responsible for the creation of the cards. It doesnt look like these are going to end up on a Subway happy meal bag, and that makes me excited. These are the first real movie cards, and they will be far from the last.

With the app update yesterday, the app store entry included some major outlining of the upcoming releases, including 100 new movie themed base cards (AWESOME!), modernography, and weapon themed examples of FA tie in material. I cannot wait to see what the stuff all looks like, and I would guess the traffic this will generate is going to be pretty intense on the app. 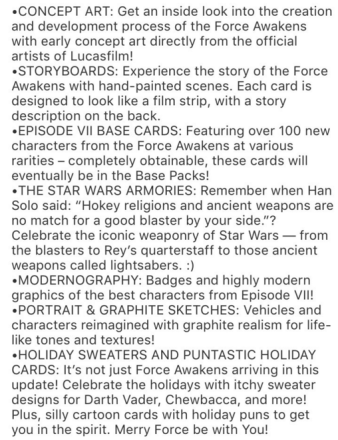 Its funny that they are going to release as many new base cards as they are, as I predicted this would be the case back during my post about this day. We already see that the series 3 base will have a new design, and that series 1 and 2 will thankfully be retired. This means we will finally have a chance to start over and build our hoards from scratch, and there in lies the fun. 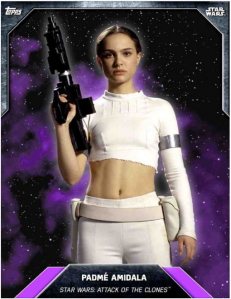 The series 3 base design may or may not be used for the movie base cards, which should be in base packs per the entry on the app store. I hope that they are on the new design, as it is a pretty dynamic look for the set. It also looks like there is more potential to use the non-photographic background for better base variants, instead of just a weird border like before. I could see them going a completely different direction in the way the base function as a vehicle for variants, and I think that will be very welcome among the people who collect base as their main target.

Stay tuned for more information today, as I would guess there is A LOT planned. Ill have updates as they are released.