Does the Cover Athlete Sig Get More Value Than Other Sigs?

After a 3 week wait, Bunt finally pulled the trigger on releasing the signature series card of Carlos Correa, the 2016 cover athlete for the app. At 225 count, it was the lowest so far by about 75 copies, and sold out within minutes. Users were scrambling to get their hands on one, and it got me thinking about how important the cover athlete is to the value of a card.

History Adds to the Allure

Since 2014, Trout has really been the favorite athlete of the Bunt team. He has close ties to Topps on the physical side as an exclusive spokesperson for the trading card brand, and Bunt made him an official cover athlete in 2015. For the first two years of “modern” Bunt, Trout was the first sig, and one of the most important of the chase. His 2014 card is still one of the most valuable in the game, despite being ‘retired’ for 2 years. 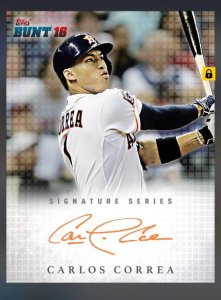 Over that same timeframe, Trout’s sig was also the lowest count of both runs. 2014 had a MINUSCULE run of 100 cards, and 2015 had a small run of just 150. The 2015 Variant was the card everyone wanted to have at just 25 copies, and it helped that Trout had another great season in MVP contention.

Correa is not the super star that Trout is – YET. He is a great young player who definitely fits a lot of the same characteristics that Trout does. Great relationship with Topps, exclusive athlete for the brand, and a personality that screams he might be one of the best potential ambassadors for the game on both a national and international scale.

All those things really dont enter the minds of many Bunt users, so it becomes a question of whether or not value is derived from his visibility as the cover athlete, ABOVE where his popularity and card count would normally put him.

Right now, Im skeptical. The reason is that if Kris Bryant was released with the same count, would everyone have gone as nuts as they did for Correa? I have to say it would be likely. Although Bryant isnt the cover athlete, his popularity is undeniable. He also plays for a team that I would argue more people collect. Both have the same type of potential in the league, but its not really about future potential. This is truly a popularity contest.

At the same time, everyone has the expectation that the cover athlete IS going to be the rarest and most valuable sig in the run. I would highly caution against this, as this statement has not been confirmed by the team. They could EASILY release a 200 count sig or below, much like they did at the end of last year a few times with Ichiro and Correa’s 2015 version.

The reason I say this is muddy is because Trout was both the most popular player in MLB, and the cover athlete, so it might just be coincidence that his presence was not a result of his status.

Correa is easily among the top 5 players in popularity right now, behind Trout, Harper, and likely tied with Bryant, so it might be just as murky of a theory to prove.

If anything, it just goes to show that Bunt has gotten the choice pretty spot on for a few years now, and its yet to be seen if the Mike Trout Memorial Spokesperson Torch has been passed both in the actual sense and the community sense. Im very interested to find out.