When the team made the announcement of a forthcoming app – an announcement that eventually became Walking Dead, a question was asked to the twitter crowd of what the next app they wanted should focus on. For close to two hours, twitter followers lobbed suggestions at the team, overwhelmingly in favor of a WWE app. Topps already had a physical card license and had been producing cards for years under the WWE banner, so it made sense.

Now that we have what we wanted, along side two very good other apps, I cant help but be convinced that this app could end up being the one that Topps Digital sees is the next flagship type of addition to their portfolio. Im not saying UFC and TWD arent going to have a huge following, but I am saying that if done right, WWE could be amazing beyond anyone’s expectation. Here are some thoughts as to why. 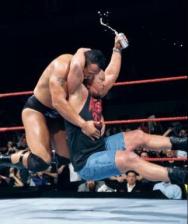 First off, if you are an American male, you likely know what the WWF was back when you were a kid. You know about Wrestlemania, and you likely hurt or were hurt by your siblings re-enacting what you saw done by the Ultimate Warrior or Stone Cold Steve Austin. Those memories, painful or not, resonate within the cards of this subject matter. The nostalgia is a reason why  so many of us keep up with this sports version of a soap opera. Nostalgia is a powerful emotion for many collectors, and its going to be a big reason why the cross traffic from other apps will gravitate towards Slam, and why new users will see it in the app store and hit the download button.

Wrestling, despite all the changes and shifts in the way the show is produced and run, still draws a huge crowd. Although it might not be the crazy M rated TV show it used to be, they still have a large viewership that tunes in every week. This fan base means that there will be a big target market, similar to UFC that will support the different programs the app wants to run. Fan base is relative, as we see that both UFC and TWD has huge fan bases, but UFC would clearly have the larger base of fans that ALSO collects UFC cards. I feel thats were Slam will have a similar advantage.

This is where WWE has an absolutely enormous advantage. Every week, every month, there are events, and there is no offseason. Unlike Bunt and Huddle, the app can run all year and have new angles and storylines through the whole calendar. The big events happen monthly, and though UFC has year round scheduling too, its not as important week to week as it is with WWE. With RAW and Smackdown, plus NXT in recent years, the biggest stars are on display at every single event. I cant even put into words how important this is.

The great thing about Wrestling is that you not only have a huge amount of main players that you can build around, but the range of content and history is absolutely enormous. Even better, most of the content can be dynamic and compelling with the right approach. Whether its insert sets build around Finishers or Wrestlemania history, or a NXT set built around the best up and coming superstars, its all here. I feel like TWD suffers a bit because of the limits of the character roster, where WWE can go for years. 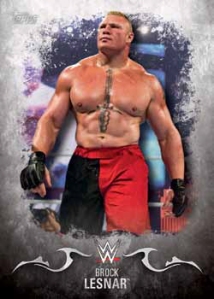 Like UFC, Huddle, Bunt and Kick, the amount of WWE physical products created each year provides a great digitization background to bring pre-developed content to the app. This is critical generating traffic from the physical side, and also gives a secondary approach to the app’s team. That variety is not only quite fun, but keeps things fresh too.

I was absolutely shocked to see how many superstars and Divas the team was able to bring to digital, and it will do them a ton of favors in creating content. As mentioned above, the history of the WWE is a big part of that nostalgic emotion, and its important to have a roster available that can showcase that. With guys like The Rock, Triple H, Stone Cold, and Flair in packs next to newer superstars like Seth Rollins and Dolph Ziggler, it provides a reason to keep going on the collector side.

This is where things can get really fun, and I hope they do. Wrestling isnt wrestling without the kitch factor at a minimum of 60% each week. You need to have those fun moments that make the app fit that same mold, and I really hope they dont go all serious with every release. There is a need for that stuff too, but without the wink wink at the camera, things just get too heavy.

When seeing all these factors lined up, coupled with a bunch of others I didnt mention, its clear that Topps Digital has a winner on their hands. Im actually knd of curious why it took so long for Slam to happen. I think they will be very pleased, as long as the right decisions are made.