Topps Huddle 2016: Your Guide to the Coming Launch 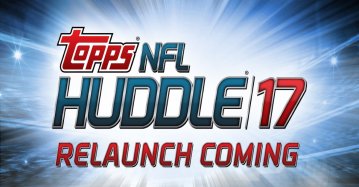 With the NFL season kicking off in September, Huddle has already tweeted out that the new build will launch this week. Basically that means we can all start revving our engines to get ready for what is coming. With this being the first year that Topps will have a digital license but no physical NFL license, this can be a game changing opportunity for the brand. They will be able to build things specifically into the cards for a digital landscape, and that could be HUGE.

NOTE: I call it 2016 because its the 2016 season. Huddle is using the Madden nomenclature and going with the year the season ends.

As we approach launch, there are a number of things that need to be considered. I would love to walk through them all, but I chose the most important things that have made successful over the years.

To be honest, the 2015 insert landscape changed DRAMATICALLY over the offseason. With so many low count inserts, the normal approach might not be successful. It used to be that the sigs and low count stuff like limited would have extreme value, but that might not be the case with the way the 2015 season wrapped up. Things like Fire, Supreme and Museum might not hold the value they had long term, so dont expect to pick up top cards of 2017 easily with a 1:1 trade of that type of content. More importantly, the higher the count on the insert, the more likely it will not be very valuable in the new season. In the 2015 Huddle launch, the change to NFL licensing brought about a significant shift in value. A similar shift will be taking place with the offseason approach, and its going to be very interesting to see how those cards fare. Im not saying to dump all your cards now, but use this opportunity to trade up if you can. Package some cards together to see if someone will be more likely to give you a shot at some really nice inserts. Sometimes, nice inserts will have carryover value because they look cool or are rare enough to make a difference.

Also worth mentioning that your collection score will drop significantly once the new cards hit the sheet, so dont be alarmed. Once you collect the base and some of the other releases, it will start to creep back up in direct correlation to the rest of the users in the app. I would guess your score should hover around 80+ depending on how much old stuff you have.

When Huddle starts up, there will be packs to buy and there will be a crap load of 2016 base cards to collect. However, I am going to urge you to wait to buy packs until the first inserts hit packs. Base cards will rarely ever sell out, which means that wasting coins on empty packs is probably not the best plan. I would guess there will be a number of sets that will be released in the first few days:

With so much content likely planned, its in your best interest to survey the scene before diving in. You do not want to miss out on a sweet card just because you got trigger happy on the first base packs of the year.

Get ready to trade and trade hard. There will be HUNDREDS of people who will jump onto the feed and post “Trading 2015 for 2016” the second the new app launches. Even though you will be one of those individuals, I would definitely find a way to get some trades done. Try to unload 2014 and 2015 cards that have no value to get higher boost cards of players who might not be the top guys. Use the red paperclip technique to parlay them into some trade bait you can use to get some cards of people you actually want. It wont be easy, but it will pass the time until the real inserts hit packs and you can finally dive in. Expect to enormously overpay for 2015, and that should not be a concern. Most people have a TON of 2015 boosts and stuff to unload – even singles – and I would advise giving up what you cant use to get cards you can use.

If 2016 is anything like 2015, the contests will launch a few days before that Thursday game. playable Broncos and Panthers cards will be in high demand, and that means they might not be ones you can trade for easily. Remember, this is one game of hundreds, so dont liquidate your collection of new cards to get the ones for this particular game.

If you really want to get ahead, start looking at the teams that have a LOT of nationally televised games. Having a lot of those team’s cards will give you a significant advantage in getting top performance in contests.

Last year, all offensive skill position guys were worth picking up as long as they were starters. Here are how I thought the breakdown went, in order of value:

Outside of that, its basically a jumble of other defensive guys and players that dont score. Dont get caught up in getting a top QB, because the way scoring was set up in 2015, the receiver almost always scored a ton more points for any nice play. DESPITE what people believe, RBs and WRs are much better for you if you are going to be participating in the weekly grind.

Based on what we have seen, here are my top players at each of the most important positions.

Not all of these individuals will have cards from day one, so pick out the ones that will likely be your top targets.

Bottom line, Contests and Boosts are ingrained in Huddle’s culture. This means there will be a lot of boosts to play in the many contests that will be available as the season progresses. Some will likely be in packs, some will be purchase only. It might be available day one this year, but I would doubt it. Basically, if you arent ready to buy into the boosts, dont. I have seen people do extremely well in contests with no boosts, I have seen people win contests because of boosts. Both work. There will be a place for everything, and Boosts are a thing that make Huddle fun.

Bottom line, this is going to be a banner year for Huddle if they can do it right, and that means that they will be focused on the parts of the game that drive participation. Being that Huddle is my main app, this is the time of year that I live for. If you have any questions, shoot me a tweet at @SCUncensored or shoot me a message in game.

Looking forward to seeing a big piece of awesomeness this week.