Huddle Thanksgiving: Predictions on What to Expect

Other than the Super Bowl, there might not have been a bigger event in Huddle than Thanksgiving and Black Friday last year. There were so many different amazing cards released that it literally set the tone for the rest of the year. Although there is no guarantee its going to be as big this year, I cant help but wonder what is on tap. Here are some predictions. 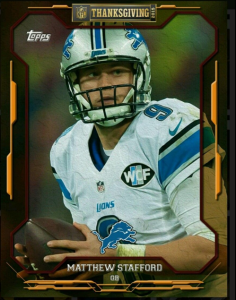 There are six teams playing tomorrow, including my Vikings, and I would expect a base set with a bunch of subjects. This was a bigger set last year with a focus on delivering boosted cards for the games that are being played, and I wouldnt hestiate to believe that it will be back again this year. Cant wait to see the design.

I would highly expect to see another go at the Sig set again, with a special focus on players who will be the top guys on the teams that are playing. This could be the first opportunity we get for a Dak Prescott single sig, and Ezekiel Elliott is likely on tap as well.

Last year we got our first look at Ginter and Turkey red, and I would love to see that tradition continue this year with some fun checklists and possible high end cards. Although last year’s cards needed a bit of help on the player list, the cards were great to have and were rare examples.

Expect a contest for each game, with special prizes likely in place. We will likely see heavily boosted GO boost cards, and that’s just the beginning. This might be a great opportunity to also introduce cards like Gametime, or even some of the more high end boosts that are thanksgiving specific.

I was looking through the card sheet earlier today and stumbled across a Dak Prescott auto patch card that looks to be limited to 10 copies. I would guess this is the first of many cards that will hit the sheet, and if they all look as cool as the example already published, wow. Just wow.

For the last couple of years, Huddle has had a group of special cards that are released on an hourly time schedule through the weekend, and I literally cannot wait to see what they come up with. It could be anything from old designs with new players or new designs with old players. It could be legends or rookies, who knows. That’s the fun.

I hope you guys are ready, because this has the makings of another wild ride. Gentlemen, start your engines.