NOTE: These cards only reflect the cards readily available in the game. Best of bunt cards with 5 copies are too scarce to value and will likely never hit the open market.

1. SR Mike Trout Signature Series (100) – 4 star playability – Trout continues to be the top card in the game at only 100 copies. I heard a report that only 6 of 100 are readily available for trade. Rest are dead or locked.

2. SR Russell Wilson Platinum Signature Series (200) – This card is easily my favorite release so far this year, and collectors in the game are going nuts. Its not as rare as Jeter, but it is definitely up there with him.

3. SR Derek Jeter Signature Series (100) – 2 star playability – lower scoring batter with a very high degree of rarity. Lots of collectors on the app are Yankee fans, which will help it stay valuable in his retirement year. 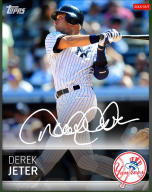 4. SR Justin Verlander Signature Series (250) – 5 star playability – high scoring pitcher, and a new sig will always push this card up the list. Not as rare as the others, but still valuable.

5. SR Russell Wilson Bowman Black Base Card (50) – Another Wilson that ended up being a lot less available than the sig, which is pretty interesting. Trading at sig levels.

6. SR Albert Pujols / Adrian Gonzales Signature Series (400) – Even though the card isnt playable, its a beast. I had to give up a ton to get one, and that’s not even a lie. Its just an awesome card.

7. SR Ryan Braun Signature Series (350) – 3 star playability – these signature series cards are going to continue being valuable to the point where it may not be worth including them on the list.

7. SR Andrew McCutchen Signature Series (500) – 3 star playability – slow start to the season has hurt this card’s playability. But as a signature, it will still be valuable.

8. SR RA Dickey Signature Series (400) – 2 star playability – Havent seen a great reaction to this card, a la Nick Swisher, but more valuable because he is a pitcher.

9. SCR Yordano Ventura Mystery Card (51) – 3 star playability – Strike out pitcher with no other cards in the game is a big deal. Gamers and collectors want this like its a sig.

10. SR David Price Heritage Limited (509) – 3 star playability – even though there are 500+, this card is chased because of the gameplay. People want multiple copies, and that means there arent a lot of them available.

Falling fast – Cards on their way down

1. Cannons – This set is clearly a nice idea, but the execution has left collectors flat

2. Pokemon Cards – Cards received for “catching them all” in a set, are clearly less valuable than the pack pulled inserts. I have no idea why this is the case, but cards like Gwynn, Trout Saber, and others are falling.

3. Nick Swisher Sig – Now that more sigs are on the open market, this is being traded as a regular insert. Rightfully so.

On the Rise – Cards to consider chasing

1. Bowman – lots of players with no other cards in the game, inlcuding Cliff Lee and Madison Bumgardner.

2. Super Scarce League Leaders – No clue why some of these are as rare are they are, but they turned out to be extremely rare.

My top gaming cards of the week

1. Nolan Arenado – Rockies have been hitting like they are playing slow pitch soft ball. Insane points. He has already secured the franchise’s top hitting streak.

2. Yu Darvish – One hit from a no hitter, and a huge amount of points this week.

Check back next week for a new Bunt list and updated top 10!

This entry was posted in Bunt List Top 10. Bookmark the permalink.