I think this might end up being one of my favorite weeks of Bunt, mainly because of the All Star festivities being in Minnesota, combined with a TON of card releases. Im going to try to cover my thoughts on a few.

ALL STAR INSERTS – SR to UC 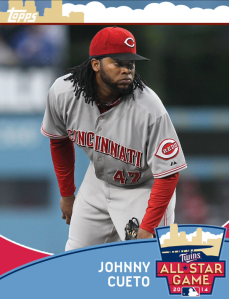 These inserts will be extremely coveted for a while, as they look really cool and lots of people will need to collect all of them to get the MVP card they will give out when you have the whole set. Remember, these will be in packs until THU, so get them traded before then. After the award is given out, you will be able to pick up your favorite players more more on the cheap.

I opened about 600k worth of all star packs and pulled 9. It looks like I may have started opening too early, as they seem to be much easier pulls than once thought.

SR Value: Extreme – I was lucky enough to pull Cueto, and traded him immediately as part of a deal with 3 other all stars and GMs for Posey Sig.

SCR Value: Strong – I pulled Teheran and Frazier, and traded them as part of the Cueto deal

R Value: Strong – I pulled Freeman, Adam Jones, Chapman and a few others. I traded them for 1985 all stars Chrome and a few Bowman diamond cards.

UC Value: Good – I pulled Castro which I traded as part of the above deals for 1985 all stars, Chrome and Diamonds

Lets face it, the Rockies are Tulo, Morneau and a bunch of other guys. They havent exactly had a great season as a team, but he is raking as one of the NLs top hitters. At 350 copies, it puts him right between Abreu sig and Posey sig, but the name may push him higher up in the value spectrum. Signatures are extremely volatile in the value they possess, and it has to do with a combination of name, team and final card count. Im still sorting through it myself at times.

Although the most playable card in the game is the Felix Fire, followed by Cueto black, this is a VERY close third. You will likely have to trade a ton of inserts or sigs for it, but if you are a points player, its a must have. This card will net you close to 800 points per start, and because he plays for a west coast team, you may not have to play switcheroo all the time. Usually there is only 3-4 9pm CST games per day, and that makes this card more valuable. 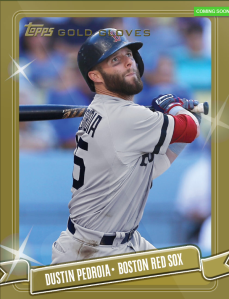 Im glad this card is a 2x boost, as it makes a bit more valuable. However, because it has a count of 1400+ its not going to be super valuable. I would expect you can get an insert type trade from a Red Sox fan who isnt a VIP, but outside of that it might only net you a SR pitcher or two in trade.

I rarely cover the weekly sets anymore out of sheer volume, but this one is different. Ripken has never had digital rights with Topps, so the recent change has allowed them to start adding cards. A LOT of people will want this one, and rightfully so, its awesome. I wouldnt be shocked if he was the legend sig that they give to people for chasing the recent releases of that series too.

More to come as there will be a ton of cards released for the all star break and ill try my best to keep everything on the radar.