As mentioned before in a previous post, HOF weekend is a big deal in baseball. Big enough that Bunt would want to celebrate it like a boss. They did just that, issuing some major cards that will be favorites in the app for a long time to come. 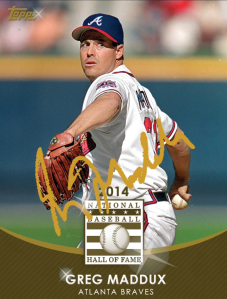 At 200 copies, this makes it the second sig in a row to be extremely limited. Its good, because retired player signatures dont do as well unless they are rare. Bunt players identify much more with active players, but such a big stage will definitely capture some big value. I heard of trades of Verlander sig plus another 500 level sig for this card, in edition to someone giving up a fire sig with a Kershaw sig. Although I dont think the value will stay that high, its going to take a lot to get one.

Im trying to think if there has been such a big bounty placed on a set this year, but I think the 20k reward might be the biggest we have seen. Adding in that there are only three makes this a hugely collectable set that will get sigs in return for all three. I have been offered Tanaka and Abreu sigs in two different trades, but have both and love these cards enough to turn those down. The simplicity is what makes them so awesome, and I am a big fan. After the reward expires they will be valuable at 300 copies each, but not as valuable as I have explained in the past. 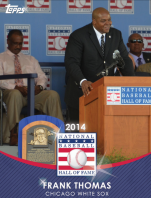 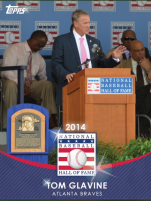 Cool idea to do speech cards along with the player cards, as this is the reason we watch all weekend. Topps Digital EiC Chris Vaccaro was in attendance and took photos for these cards, which is similar to some of the cards we saw during the all star game.  All three players gave great speeches, and this gives a second chance to the people who missed out the first time around. The set wont get you sigs, but it will get you some nice cards.

Like we saw with All Star fan fest, commemorative cards for the venue were also released. These cards are significantly less rare at 2000 copies each, making them a more affordable option for people who dont have the firepower to trade for the player cards. I really liked the venue cards for the all star game, and these are similarly as cool.