Wow! What a week of Huddle, right? So many cool releases and even more cards that add to the different options that we have to chase in the game. Although the weeks are dwindling in the season, the playoffs always get crazy, and many of these cards can help you out along the way.

Just in case anyone wanted to take a look, the first three winners of the Parallax ticket have had their cards delivered. They look very much like the normal sigs, but if you have the parallax effect turned on your iPhone, you can see how they look with a 3D style presentation. Really cool to see them in action, and the player selection is pretty interesting, no doubt about it. These are all 1/1s, so dont expect the users to trade them, which I know is going to be confusing for some. 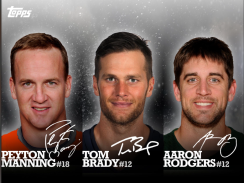 This card is a beast and comes with a beast reward of 75k coins. This means the 100 copies of it are going to be impossible to trade for until the reward expires this wednesday. I love the look of the card as a triple horizontal card, but the fact that you cant get boosted points from all three players is some fun that we missed out on. It was the same thing in Bunt, but still a very cool card none the less. I have been hunting for this card unsuccessfully since release, and the pull rate makes it even more difficult to get. 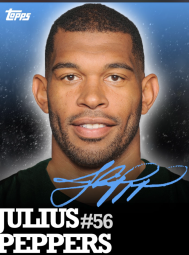 I really like the idea of splitting up the sigs into a rarer version and a set reward version. Both of the Peppers cards are pretty low count, and I am actually pretty shocked that he was the choice. The Packers got like 7 insert releases over the last few days, and they already had a sig released in Rodgers earlier in the year. This doesnt even take into account that Rodgers was ALSO on the triple sig. I think its time to let some other teams have a shot at a sig. That being said, the blue sig is a VERY tough pull at 55 copies, and with a 5x boost, it might be worth chasing just to have as trade bait for other rarer sigs in the game. The white sig at 250 copies is way too low for someone like Peppers, and the 4x boost makes it worth picking up for the post season.

I see that they are starting to mess around with contrast in the head shot cards and making it work for them. I like the idea of a super low count series, and I think the concept is definitely interesting enough to make me want to pick this card up. Its a cool design, and a low print run, but the 5x boost is REALLY nice, especially if the Seahawks can put it all together for the playoffs. Now that I think about it, this card really reminds me of those NFL Street games from PlayStation, where it was like NBA jam. Nice nostalgia buzz there. 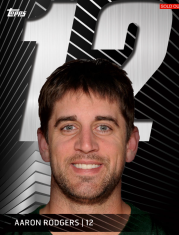 Although I am not a huge fan of the name of this series, I am a huge fan of the concept of this set. I think it presents a situation very much like the lightning cards in Bunt, but the added 5x boost is going to help these a lot. The Mint cards are actually much more valuable than I could ever believe, and its not crazy to think that this card might end up being one of the more valuable inserts available at the moment. Rodgers is hot, and only 12 of these means that its basically unattainable.

I really like the concept of making these look like Hunt for Red October style one sheets, but I am not really a person who loves defensive players. Although the checklist is strong, and the cards look cool, im not one to chase this set.

With continued blue boost releases and likely more of these chase style cards coming, looks like this is going to be a fun couple of weeks until the playoffs start.

This entry was posted in Reviews and Commentary and tagged Football Cards, Huddle, topps, Topps Huddle. Bookmark the permalink.