Huddle Tip of the Day – Gridiron Greats Arrive for the Masses

Posted on December 3, 2014 by SCUncensored

If you played Bunt, you likely understand a release like this. From the beginning of the app, Bunt had the On Deck series, which was a set of cards designed to help new players have top scorers to compete from the beginning. They received a coin reward for collecting the set, which gave them access to open packs for the first time, and trade bait for all the vets who wanted the cards and coins.

A similar set was released when Android users came on board, this time in the form of “Men of Action,” which consisted of the 3 top pitchers in the game at the time. Both were extremely successful programs, as it helped new users with onboarding into the app, and getting some cards that they could use.

With the release of Gridiron Greats, it is a very similar situation, releasing four top players at a 3x boost for everyone in the app and new users who come on board. Aaron Rodgers, Peyton Manning, Calvin Johnson and JJ Watt are all very important cards within the app, and even I do not have a full slate of 3x cards for these guys yet. That means it will definitely be beneficial. 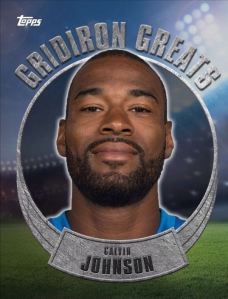 However, it also goes without saying that they will be popping up in your trades for a long time to come. Because everyone has them, and because new users find them valuable, you will start getting offers that include these cards for ones that likely dont have that low a value. Its annoying, sure, but easily taught to a new user that your Luck sig is not on the same level as a set of these cards.

I think this is a great move to include these cards for new players, and I actually think that it should have been done much earlier to prevent the lineup lag that many players experience during their first few weeks in the game. No one wants to play from behind, and these cards may end up being a huge boost for those new players. At the same time, I believe there is also education that is needed, because all those new players will see that these cards wont get them the top inserts they desire, get frustrated and leave. This game is all about the red paperclip type of approach, and many lose sight of that.

Start from the bottom, dont give up easily, and trade like mad. You will have a fun collection in time.