There have been a lot of fun cards released over the past few weeks, including a few that enter new territory for 2015. There have been milestones and fun ideas, and I want to take some time to break them down. 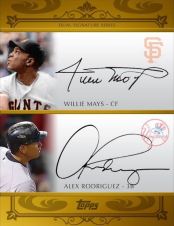 When I saw this released, I was intrigued to say the least. Although Dual Sigs were pretty common last year, released frequently throughout the year, we hadnt seen them yet in 2015. To be honest, I like the 2014 design a lot better, as it gave a lot more space for big photos of the players. Here, the focus is on the sigs. There is a lot of space that I feel could be better used, but that’s just me. Its clear they are modeling these cards off of dual sigs from the physical side of the business, and though its not as cool as 2014, the card is still very nice. A-Rod is a villain and then some, and he has gotten a lot of attention in Bunt lately because of his 661st home run, but this was a cool idea to pair him with Mays. Everyone loves Mays.

I am not a fan of this design. Too much going on with all the text, and I am not sure where everything fits. Its very Yankee like, and I am not sure how that will transfer to other cards, IF it will indeed transfer at all. With the amount of cards in the “Headlines” set, including an A-Rod 661 card, im kind of wondering what the purpose is here? I know TOPPSMIKE is an A-Rod fan, but if there will be milestones AND headlines, its going to get confusing which belongs where. Some Milestones like Cutch’s 1000th hit would have gotten a card last year, but not this year? Im not seeing the purpose for this. 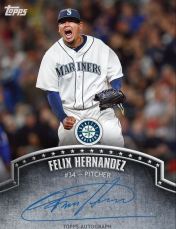 I love this card. Easily my favorite sig of the year so far. Its a great picture, a great player, and a low card count. This is going to be one to keep. I had to give up two sigs to get it, and I dont regret it one bit. My only complaint is that this is the second Mariners sig in 6 weeks. That just doesnt fly for me, as I feel like they need to spread the love. At the same time, Felix is one player to make an exception for, as he has always been a Bunt all star. Lets just hope someone else gets a chance next week. If I remember correctly, we had the same issue with the Yankees last year, and there were a lot of unhappy Bunters.

Another strong entry in the signature series line, and though I HATE the Tigers, I know this card comes from the right place. I like that they are going with bigger names off the bat, as that is what this is meant for. Sigs are more about getting the all stars on the checklist, and less about deep cuts. This is perfect. 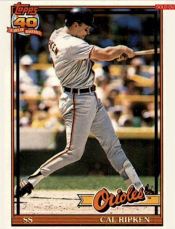 This is going to be a new weekly (or so) Insert, and I think it works on a lot of levels. If you were around last year, cards like this were done each Thursday, and Im glad they are back for 2015. The retro cards are always going to strike a chord with people, and I think that this is a very good way to start it out. My only complaint is that Bunt seems to be going variant crazy, and I dont really think its necessary. It kind of dilutes the desire for the base card, and this particular set had the legs to stand on its own. 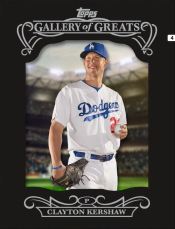 Love the design, love the Parallax, love the checklist, HATE THE PACK PRICE. I get that they are asking us to pay more for the Parallax look, but I dont think I am supportive of that. This set is a digitization of a set from the physical side, one of my favorites from 2015 Topps Series 1. Looks great here, and ill forgive the price this once.

This set was a throwaway last year because of how many of them there were. I think the design has improved 100x, and the cards are definitely more tradeable this time around. That being said, you still have to find the right person who is collecting them, and the card counts are still unlimited. Not a good situation, in that regard.

Interested to see what other surprises the Bunt team has in store, as I can tell that everything is staring to pick up fast.