A few days ago, I talked about the Rookie Premiere that had taken place in Los Angeles over last weekend. If you arent aware, 40 of the NFL’s top rookies were invited to attend the event, do some press, take some pictures and sign tons of autographs. For the first time, Topps Digital’s Editor In Chief, Chris Vaccaro, was in attendance – and we all know what happens when Chris has an opportunity to take some pictures.

The first of the content that Huddle was able to get approved has been live now for two days, and for the most part, is generating a lot of interest in more cards that arent the typical head shots. Personally, I have been waiting for Huddle to take this jump, as non-game non-headshots seem to be well within their rights to produce cards. Being that the Rookie Premiere is the top NFLPA event of the year, it should be a no brainer that it get top billing in an NFLPA branded app. 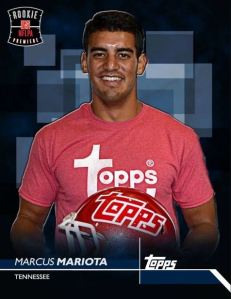 Huddle already had enormous success with their draft program, an event I believe was as impressive as anything we have seen in any of the four apps. It is very difficult to build cards live, especially on a night as busy as the NFL draft. To do it with the cool factor they were able to achieve is another story all together. Quite the feat.

This set is different, as it is the first officially branded event in the history of the Huddle app. As an NFLPA event, they have access to use the logos for the event, as well as content delivered during the course of the activities. It adds a level of official-ness that has been long absent from the app, especially when you see how classy some of the cards are looking.

We havent gotten a full slate of what is coming yet, and I am SURE that there will be quite a bit of content yet to come. They have already released rookie premiere player cards, with variants, and a series of Selfie cards that are interesting in their own right. Additionally, we know that there will be at least one sig in the reward card offered for collecting all the steel variants of the player cards. Now that we know sigs are possible, I am CROSSING EVERY FINGER AND TOE that we can get offseason signature series type inserts with a Rookie Premiere logo on it.

Let me restate how important it is that Huddle is taking events like the rookie premiere seriously. For all the years that the game has been around, we have seen content from the event zero times. Digital has never even been a thought to consider in the grand scheme of things, and to see that they are now on the main stage, is a great thing. This should be the first of many additions to the repertoire of the Huddle portfolio, and I cannot wait to see what happens.

I have attended the Rookie Premiere a few times, and it is every bit the amazing event that it looks like it is. The rookies have a great time, the companies get a lot of content, and the press gets their first look at the top guys in the class. To see the event commemorated in the app is really cool on a lot of levels, and I hope more risks are taken in delivering fresh programs as a result of the success of the last two.

Most importantly, it falls on us to support it. If we want more content delivered in a fashion that isnt head shots on a new type of background, this is our chance to show them how much we like these ideas. Dont be apathetic, and definitely provide feedback via the channels that are available. Tell them what you want, and if you think these are terrible, tell them how to make these programs more appropriate.

Even more important than that – if you have any of the new cards and are looking for a trading partner, shoot me a message.