It happens every year. Baseball’s trade deadline is easily one of the more active times in any sport for trades, even if you are a superstar face of team. No one is safe, and neither is your Bunt card sheet.

If you havent experienced this already so far this season, anytime someone switches teams, their original card is marked sold out, and a new card will be created for them on their new team. This has led to a number of cards already being very limited in their card counts – especially guys like Melvin Upton, Carlos Quentin, and company.

With Series 2 released yesterday, we have already had some casualties – including Aramis Ramirez, who’s white common sold out at a measly 88 copies. The green is even less at 77, and so on and so forth. His Gold didnt even make it into packs. With more trades undoubtedly on the way, its time to start preparing for life after the deadline. 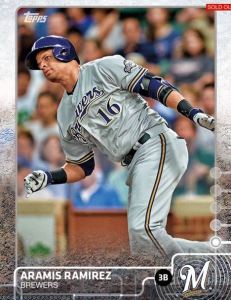 Pitchers like Johnny Cueto and David Price could be on the move, which in turn will sell out their cards. There will be other players on the move as well, although they may not be easy to pick up on until the trades are announced. Because big names are endlessly speculated on, you can easily see the gears moving before the deals go down.

Its going to be interesting to see if series 2 awards will be available considering the situations that exist with the different cards that are already sold out. Curious if they will be part of the set, or if the checklist wont include the players who had less than a day in packs.

Bottom line, if coin rewards are going to be given for sets, everyone will be looking to track down the sold out cards. If you are lucky enough to end up with one of the low numbered cards that will eventually result, do not give them up unless you are getting something nice in return. I have seen low numbered base go for inserts that are below 500 if someone really needs the card. Obviously, let the market speak before you make a decision. Demand will not go down, and value will only climb as more people join on as we get closer to the playoffs.

To get an inside line, sites like MLBTraderumors.com is a great place to stay glued to over the next few weeks as the initial deadline passes. There is another waiver deadline later on, but that is still a while from now.