Five Underrated SWCT Insert Sets You Should Check Out

Topps has done some really cool sets over the first 20+ weeks of the app, and many of the undeniably amazing and low count sets are valuable universally. Others are more below the surface, and are quite underrated in the way people look at them. For whatever reason, some of these sets just never caught on, but I still appreciate the way they look. Here are a few of my favorites.

When this set came out, the weekly insert sets were still vastly in the shadow of Marathon cards. As a result, very few people bought the packs and collected the cards with the same fervor. Its too bad, because the look and content of Shred was awesome. I love the torn look and the subject list was really well planned out. All of which was overshadowed by the award card, which was the first time the Millenium Falcon was featured on its own card. 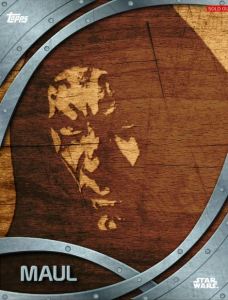 Although the Rust parallels are very valuable due to rarity, this set was amazing. Like Shred, it was relegated to second class status because of the Marathon cards, even though they are some of my favorite looking in the app. That Maul is just menacing. I love it. You can probably pick up the silvers relatively cheap, especially some of the lesser subjects. Some of the main guys are still somewhat valuable.

The great part about Icons is that it is still in packs! I think Icons suffers a bit because the colors on the parallels dont form a consistent approach – something that has been a huge problem with the last few sets. Either way the individual cards of the set look really cool – almost like posters in their own right. People have kind of avoided this set, which is a shame.

The wireframe look of these cards reminds me of old video games, and the way the subject matter is displayed in such a dynamic fashion is really cool. For a while, Intergalactic was victim of a time where there were like 5 sets on the market, and all of them were getting negative publicity in the feed. This was definitely one of the cooler sets that didnt deserve the treatment it got.

Im not sure if you can really call this undervalued, because some of the cards are really hard to come by. Lots of people collected it, but the ransom note graffiti approach is really a pretty unique take, and looks like a concert poster from the late 70s punk shows. I dont see many trades come across with the set, and Im curious if it does have the value it should.

Im sure there are other sets out there that you guys love too, these are just the ones I would think should get a bit more of the accolades we see for other sets.