Bunt Boxes: What to Make of the 1990 Draft Picks Event

Posted on October 4, 2015 by SCUncensored

For those of you who were not familiar with this set, it was released in 2015 Topps Archives, with some of the best looking retro cards of the year. Based on the crazy popular 1990 set featuring Frank Thomas’ rookie card, this was a throwback to cards I loved as a kid.

Introducing “box breaks” to the app, Bunt used a special format to release the cards, which included a rare signature card as a “box topper.” Im actually surprised it took them this long to implement something like this, and though the execution was fumbled by tech issues, I think its a great idea. 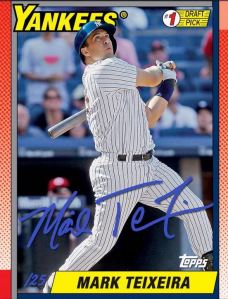 Basically, this opens the door for what many users have complained about since the beginning of 2014. Ripping into tons of packs, and not coming out the other end with anything to show for it. This takes care of that situation exclusively with adding a VERY valuable card for the tremendous spend of 500k coins to get in on the action.

Check out some of the 1/1s already listed on eBay:

The 1/1 signature cards are the first of their kind in Bunt this year, and are worth spending the money just so that you can have access to the set. Not only is the set awesome, but to be able to have a shot at some of the insanely rare signatures guaranteed is a no brainer to me.

I rarely buy into large coin bundles, but I was all over this promotion. For player collectors, pulling one of the top guys like Trout or Harper could mean a windfall of trade value if you find the right person clamoring for the card.

When I saw that my main player target had a sig, I immediately began the quest to get it. I was able to get my hands on it thanks to a massive offer I made, and I literally could not be happier. Im sure there are more people out there who are feeling the exact same way.

Eventually the box break should come back more often, if I had my way. Of course, it has to take the right type of set. It cant be used with signature box toppers every time a new set is released.

Even with the massive issues that plagued the release, there werent many people who walked out of this disappointed. That should say a lot about how exciting some of these cards were.