SWCT Force Tip of the Day: What to Expect from Topps Illustrated Mania

Posted on October 5, 2015 by SCUncensored

Cards with low card counts have major appeal in SWCT. It stems from the app approach that many cards should have counts that make them accessible to the massive crowd that populates the game. When the team designs a program around counts that are destined to be extremely limited, you know people are going to go nuts. 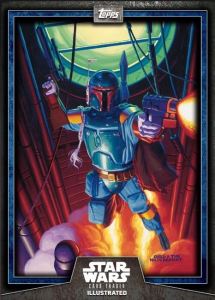 There is no doubt that this program is designed for the whales. If you have managed to save up the enormous pack cost of 500k-900k, this is probably not the place to spend it. If you can spare the coins, and love the cards, than by all means, this is for you.

In reality, spending the 500k on the premium pack is probably not the best way to go, unless you just dont have a way to spend the 100 bucks on the supreme pack. The reason I say this has to do with the pack structure, as you are only afforded one card per 500k pack. In the Supreme version, you get an extra card for 100k less than it would cost you otherwise, plus you get the opportunity to pull the red version, which has been insanely hard to get.

As for the gray pack, which only costs 5k, this is where you can REALLY make out. Because the odds are tough, its likely you wont be able to pull more than one gray parallel in the pack during the 5 minutes its available, but you might get lucky and pull a single copy, which you can trade for some massive hauls.

When the program first started with Boba last week, it was a much different dynamic than what we saw with the second card. Even though the counts were almost identical on all the different parallels, the villains cards definitely started off lower in value from the get go.

With Boba, value was inflated at first because of two main reasons. First, no one knew what the hell was going on, and every Boba collector was scrambling to get their hands on a card that they thought could have a count less than 50. Secondly, once the cards hit over 100, there was less of a buzz, even though that is still an insanely low card count for any insert in the game.

As with most investments, the cost of the pack was likely more than the eventual value of the card, which showed in the second release. Because the whales knew that many people were purchasing the Villains pack to trade the insert, the leverage of holding the card hostage for a ransom was gone. This means there would be a flood of each card hitting the block, coupled with a steady stream of people looking to unload their now less rare Boba card.

Let me put it this way, the card will eventually be more valuable than it is currently – ESPECIALLY if they offer a shred opportunity in the future. I could see them putting out gold parallels and allowing you to shred another parallel for a shot at one. If that is the case, it could reduce count and add value back to the people who had them for trade.

I believe that all the apps will have some sort of limited guaranteed insert type format eventually, and that this will not be the last set in SWCT to use this approach.

If more cards are released, the demand will always drop, even if they decide to reduce the number of packs being released. There are two cards that always go for more in a set, the first card and the last card. The middle cards are usually less valuable, unless there is some huge amount of extenuating circumstances.

Bottom line, I think the Smuggler’s Den is the wild card in all of this, and I would play each card with that in mind.

For me, I really like this format and hope that they use it in many more different ways. The app loves limited releases, and this presents a great way for that to be available without people freaking out about set impact.

Cant wait to see how this evolves.