If you are a Steelers fan, yesterday was a pretty big deal for you. Not only did Huddle release the first ever “Pack Journey,” but they also released 3 additional Ben Roethlisberger Variant Sigs

and the first Triple Sig of the year. These cards should end up being EXTREMELY rare, but are they valuable enough

to participate special release programs of this sort?

Special programs, like the Pack Journey we saw yesterday, were around last year as Huddle hit the middle of the season. Like this year, we saw variant sigs as the prize

, but nothing like we are seeing with the Triple Signature card. Although triple sigs were also around last year

, they were readily available for anyone to pull from the packs that were in the store. They were tough pulls, but nothing like this year.

The prize pack variant sigs were insanely rare last year too, and as I expect this year’s cards to be, were very valuable. Because Huddle was so much about gameplay during the season, the sigs didnt have the clout they do now, but were still sought after above and beyond any other insert.

Right now, the dual sigs and legends cards are at the top of the mountain for all the chase cards, save the 1/1s that are always going to be the top. The triple sig should end up being around the same value, if not only because its the Steelers and the first card of its kind. It should end up with a card count at or around 30, which will put it around the Newton dual sigs that were released three weeks ago. This is a very good thing for the people that pull a copy.

There will definitely be more triple sig cards. That should be expected. I would also expect that the format of the pack journey may change, as the cards are climbing in count a bit faster than I would guess anyone expected. I hate to say it, but if we are going by the standard of previous pack journeys, the current one is too easy. Previous pack journey cards rarely went above 15, thus keeping value for the users who dropped the coins to get access. I completed the Romo offseason pack journey, and ended up with a 14 count card.

As for the Variant Roethlisberger sigs, they may come down in value as the card counts rise. Pack journeys havent usually lasted more than a few hours, and the 48 hour window on this program is going to be tough for the people who bought in expecting a bit lower count of a card. The gold is pretty much the toughest of the three to pull, and its count still hasnt hit the danger zone like the others have. Im not saying that the cards wont end up lower count than normal variants, its just the fact that they are not tied to an award means that the rarity is a bigger part of determining value. This goes doubly so when considering cost to obtain through the packs. 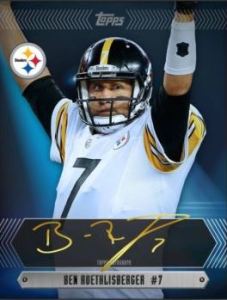 I will say that I am curious as to why Roethlisberger was used again. This is a prime opportunity to inject some new blood into the chase, and adding variant sigs after the fact doesnt usually go over well. I do like that they changed the picture, as it prevents confusion, but I cant help but feel like this is a missed opportunity. Considering that both Le’Veon Bell and Antonio Brown sigs could easily carry a pack journey instead of Roethlisberger, I would have gone that direction.

Suggestions for the Future

If I were running the program, here are some suggestions for next time that might lead to some better outcomes:

As with every Huddle program like this, the players will carry the brunt of the call to action. If the cards and the players dont measure up, the rest of the program will fall apart. Luckily, the checklist for Pack Journey 1 was on par.