Topps Bunt Preps for the Pennant – Your World Series Must Haves!

If you saw yesterday, all the World Series gold cards were released, which included 7.5x perma boosts for the remaining 4-7 games. Although these cards will be the app’s shortest timeframe for playability, they are easily some of the best base cards produced so far. They come complete with a special gold border and the world series logo. Pretty sweet. Here are my picks for the top guys you should chase.

I think its pretty clear that deGrom has made a name for himself during the post season so far, and he could easily cement a lifetime legacy if he continues to pitch the way he has up through the last series.

There was no more exciting run during the last series than Murphy’s homer streak. He is a player to watch during the upcoming few games, especially to see if he can get a good look against the Royals’ pitchers.

The Dark Knight has been ripe with drama this year, and the World Series is a stage where he can hopefully quiet some of the words that have spread surrounding his personality and preparation. I think he could end up having quite the series if he can keep his head straight. 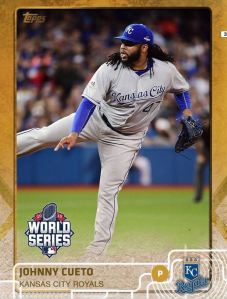 Although he had a rough go during his last start against the Blue Jays, Cueto is still a must have for this staff. He has a great opportunity to show what he has against the potent Mets lineup, and I will be interested to see how he performs.

This guy was the story of the 2014 post season, and he could easily put up some nice points this year too. Cain has yet to really have a poor bunt game during this playoff run, and should end up having a nice series. He also rarely strikes out, which is a huge plus. 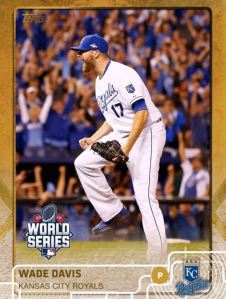 I would put the whole KC Bullpen here, but this is a tough call of who to pick up if you can only have one. They are easily one of the best in the league, and have been lights out during the playoffs so far. Lots of Ks, very few hits, great pitching. Because the Mets have a better rotation, this is going to make for a very interesting matchup.

Lets face it that these arent the most popular teams in the league, but they are both deserving of their run. This is the second straight WS for Kansas City, and the first for the Mets in a long time. It makes for interesting baseball, and lots of fireworks, just like there always are. Have fun everyone!