This is a unique time for Huddle, if not only because for the next few weeks, large portions of the active NFL player population will narrowed down as teams are eliminated from the playoffs. This means that sizable portions of the boost checklist will have scored their last point in Huddle. The question I get a lot from people in game and on Twitter centers around the value of these eliminated players, and the value they maintain after the season is done for their team.

In case you werent aware, the likelihood that any 2015 Huddle cards will score next year is so small it isnt worth discussing. For all intents and purposes, when a player’s team is eliminated, the points for that card will forever be done as well.

Although Huddle has a lot of collection worthy cards, especially as of late, points have always been a huge part of a card’s popularity. That means that people will complain when Huddle releases cards of eliminated players, or assign boosts to players who dont have the ability to score any further. In the end, it really doesnt matter, as the season will be over in February for two lucky teams, and everyone else may be done in a matter of days.

When you consider the trade economy and the landscape of Huddle users, there are a high level of points players. Similarly, there are a lot of people who play for points, but also collect something very specific. Whether its a team, a player, or a type of card, many will collect on top of playing for points. Then there are people that are straight collectors, and they value the quality of the card over any sort of boost from the get go. 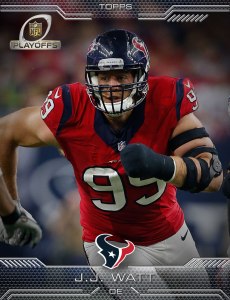 This is why value of boosted cards, post elimination, is not zero. Card count will remain a prime determining factor in value determination, as is the design, theme and look of the card. There are a lot of reasons why eliminated players should remain part of the Huddle daily planning for releases, if not only to keep things interesting. Eventually, there will only be a few teams left, and that just isnt a lot of star power that remains.

If you have been on the fan feed, team and player collecting is a big part of what makes Huddle fun, and has been influenced significantly by the acquisition of the license for the NFL. Since the beginning of the year, teams and players have become much more a part of our existence on the app, if not only because we can appreciate the uniforms and logos.

Everyone wants to complete their playoff sets, even though there isnt a card or cards for doing so. This adds a level of value that extends past the player, team, and points collecting, as users always derive value from a coin based reward. At the very least, trading needs for haves is a great way to start, but keep in mind that just because a player is eliminated, doesnt mean they arent part of someone’s set.

Similarly, star power still has pull, especially in the higher parallels of the playoff cards and especially the playoff inserts. Trading Adrian Peterson for Matt Jones or Reggie Nelson is going to be a tough pill to swallow for most, mainly because of player status and fan preferences.

If both player cards involved in the trade are eliminated and not really the superstars of the team, rarity level for rarity level trades should work perfectly for most. Some may even pay for needs a bit more than they would if they have dupes.

It is safe to say that active offensive skill players will command the highest premiums, especially if they are top point cards. With the advent of fantasy style contests for the non-pay contests, QBs have all of a sudden become much more of a hot commodity. If you have one and want to complete some sets, you could walk away with quite the hoard of eliminated player cards.

Having Fun As Teams Are Eliminated

I dont like that people complain when cards are released from the 24 eliminated teams around the league. That is 75% of the available players out there, and many of them have some big names that could be valuable in the right setting. Considering only 200 people play in the premium contest, and there are plenty of cards available for the regular contest, its okay if Huddle wants to throw a bone to fans of the other teams.

There is no reason to complain, especially when you see just how many thousands of cards exist for a player on an active team. If you are really hurting for more, that’s why trading exists. Huddle can continue to deliver compelling content for playoff teams while still having a lot of nice stuff for everyone else as well. The two are NOT mutually exclusive.

In the end, it comes down to what you like, and buying only that. If you dont like what is being released, the loudest voice as a common user you have, is with your wallet, not with immature and wasteful complaining. Concurrently, if other people do want to buy, that’s up to them. Constructively delivered criticism has frequently been welcomed by the Huddle team, but its the “this stuff sucks because these people are eliminated” complaints that really get us no where.

Closing Out The Year

As we progress towards the Super Bowl, Ill have a ton more commentary on how to approach things, but I will say this. There are a hoard of cards coming per their app update text, and I can guarantee that many will be playoff related. If you are a fan of a team that didnt make the playoffs or was eliminated from the playoffs, this is your time to cash in. Dont sit back and let this time pass you by without getting some great trades done. If you arent playing for points, now is the right time to pounce.