Right now, everyone is still in the whole feeling out phase for Series 3. Variants havent been online in a major way yet, and the counts of the white cards are just now creeping above 100k. Being that hoarding has taken hold as the main way to pass the time in SWCT, who are people choosing and what are the issues with that.

If you have been on the feed any time since the launch of Series 3, you know that Rey and Slave Leia are the top targets for the year to date. In fact, I would say its not even close. Although I completely understand the app’s obsession with Rey, Slave Leia just isnt something I feel good about using in this format. Leia wasnt hugely hoarded during series one as a whole, despite having a few different versions.

On top of that, the team had a very anti-slave stance on everything Leia, and I was more than fine with that. Now to see Series 3 launch with her as a base card, only to be the second most popular hoard target isnt rubbing me the right way. Alas, it is what it is, and if the male dominated community wants the Bikini, they are going to have to fight through hoards of people looking to build their own hoards.

Again, this is in a similar vein as the above statement, but I would guess much less sexually charged. Female characters like Ahsoka and Padme have been popular since the beginning, and now Sabine and others have joined the ranks. Being that powerful female characters have been a part of the universe for decades, Im not surprised that they are popular in the app. 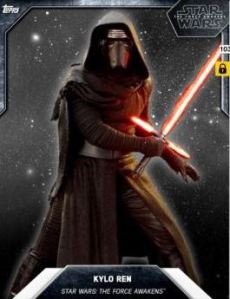 This makes sense to me. He is a villain, quite possibly the equivalent to the new Vader, and SW fans love guys like that. Kylo is popular enough to trade at a high level, and it should be no surprise that he is a top guy considering his role in the new movie.

Whether its Maul or Captain Ithano, characters with a cool appearance always draw a crowd. As more people figure out hoarding priorities, these characters have been getting more and more of a following. Maul is already a popular character as the only interesting part of Episode I, but the cool looking base card helps even more. Others like Grummgar and Bobbajo are part of this group too.

This is really interesting, as I feel supporting characters are being abandoned as hoard targets more than they were in Series 1. Maybe abandoned is the wrong word. Overlooked? Yeah, that’s better. I think that the supporting characters will eventually get people on board as more hoards take shape, but I have so many dupes of these guys that I would love to trade for my hoard, and im just waiting for the one person who needs them.

At the moment, anyone who is hoarding knows that this is a marathon and maybe an Iron Man Race. With so few users collections having hundreds to thousands of dupes, trades are onesie twosie right now. That is slow going, and still no word on the monuments existence or count needed.

If the counts increase on monument qualification, or if they dont exist at all, im curious to think what might happen. Although I dont think we would see the end of hoarding, but we might see some attrition towards other parts of the game. I have often said that more systemic recognition of hoarding is needed, and if I were Topps, monetization as well.