UPDATE: A Quick Rundown of Predictions for Best of Bunt

UPDATE: Here is the article that explains the contest(s)! Looks like there will be two different contests that are available for 10k and 25k a piece. The main prize is a Carlos Correa 1/1 for the top scorer, and then a Trevor Story and Francisco Lindor cards for other place finishers. The other contests features Corey Seager for scoring 250 points.

Per some tweets from the team, it looks like the first Best of Bunt type contest is coming this weekend, most likely for play on Sunday. Being that this MIGHT NOT be called Best of Bunt, forgive me if things change a bit. Being that this is the first contest of this type, its going to be cutthroat, so here is what I would predict to be the case.

Since 2014, there have been cards released every week that celebrated the best performances of the week. In the first go around, BoB was derived from the top finishers on the weekly leaderboard. Last year, it was a contest on Sunday where the top performers in the contest got the cards. This year, from what it looks like will be very similar. 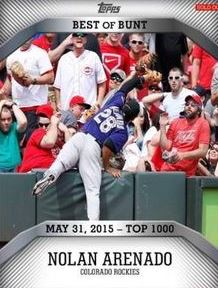 These cards have varying appeal, as some people absolutely love them and either keep them as trophies or collect the ones they want. Player and team collectors usually go nuts, but once they get their cards, the remaining copies can tank in value.

Bottom line, whatever form the contest takes, play. Even if it costs the entire daily bonus plus some, save your coins over the next few days just in case. You will thank me.

If the contest turns out to be unlimited switches, exchange your tickets for the pitcher GO boosts. If the contest is fantasy style, its your choice. Take a look at the matchups and make an educated decision based on how you expect the different choices to play in the game. Take a look at K/9inn, WHIP, and ERA to date, and on the hitter side, try to avoid choices that have tons of strikeouts, even if their average is high. The better the OPS the better the choice.

You are going to need some major firepower to keep up with the top guys in the contest. Think lots of purples and teals of the good players, and blues and oranges where the other cards come up short. At this point, I wouldnt go shredding cards to get the upper levels, as 2 purples will do you better than 1 black if you are hurting for boosts.

Keep an eye on the MLB.com scoreboard and use MLB.TV or Extra Innings if you have it. Try to watch the games with runners on base especially, as that means the hitters are going to have some opportunities to score some major points. If you arent seeing a hitter worth playing, make sure you have pitchers in for all 9 spots, and watch those games carefully. XBH hurts pitchers a lot this year.

From what it looks like based on Mike’s tweets, there will be 4 cards of varying rarity, just like the previous 2 years. I would guess that the structure of payout will be 1-10, 11-50, 51-100 and unlimited for all the other players who score 100 points. You should be able to see the players ahead of time, so pay attention. There may be some coin prizes too, but you never know.

Overall, this is going to be the first MAJOR contest of the year, so start preparing now while you have the opportunity. You will definitely have a head start, as the community is notorious for getting a late start on things.

1 Response to UPDATE: A Quick Rundown of Predictions for Best of Bunt