The Good and Bad of Changes to SWCT Gold Cards

With Rey and BB-8 now released in gold format, we saw a SIGNIFICANT change to the shred requirements needed to redeem the offer. Instead of the 100 white cards that were required previously, each now require a rainbow of parallels to meet the specific needs. Naturally there were people who were upset, so I wanted to take some time to look at this from both sides of the coin. 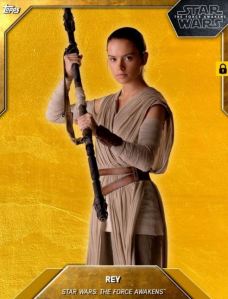 Mini monument cards like the gold were around for series 1 and series 2, both in Pink format and others that required a lot of cards. When the pinks started, the requirements for shredding golds were low, and by the time it was over, the gold cards required was in the high double digits. As collections grew to meet the perceived targets, the targets increased to stay one step ahead. The lesson that should have been taken away is that just because something is one way for one offer, doesnt mean it will be that way forever. Its not a positive lesson to take away, as standardization and setting expectations is something that had a positive effect on the full monuments. We will get to that in a second.

Why increased standards are good

Regardless of what people said with their mouth in comments and on twitter, the chase was real. The minute people saw that they needed a lot to get Rey, a feeding frenzy began. People were scrambling for cards, and though they might not have been happy about doing so, it was a market that oozed action. For a trading based game that has slumped a bit on the trading side, a good ole fashioned round up is always good.

Similarly, because of the rush, people who had meager hoards of Rey suddenly became sellers, which for the people who knew what they were doing, made finishing their needs easier. Anyone with Rey anything was trying to unload, which meant that it became much cheaper with so many sellers willing to part with their goods.

The reason the standards were increased probably had to do with the number of people who had enough to shred 100 Rey cards. As the most popular hoard in the game, the gold card at 100 whites would have had a minimum count of like 8000. Obviously the work to get a mini monument is diminished when so many people get the card, and that’s part of the reason people do it. If you get the gold, you want it to have some value, and the previous set up was not favorable to that.

The Rey gold finished at 79, which meant that many more people had the requirements than even what I expected. This is the type of thing I want to see moving forward. I dont want 8000 people to have what I have. I put in the work and I want a card that few people have.

Im actually not so sure the Rey requirements were that out of whack as to the state of the game. I havent worked much on my Maul hoard as of the NFL playoffs, and I had more than enough to get it done. There were a ton of big hoards out there for a character that is much more popular than mine.

This also resets expectations, adding value to base parallels that might not have been valuable to this point. If the Gold mini monument has this much of a requirement, what will the regular monument have? With new standards for what people think will be included across all golds and future monuments, those people who have 80 characters at 100 white cards just got a reason to start hoarding more. This will be a very good thing for the trade economy that had slowed, especially as people reached their 100 they thought they would need.

Why increased standards are bad

As with any change that requires more cards, there will be lots of complaining from the people who know the new standards will exclude them from reaching the finish line. Many of these people are likely free players, and that can be a really large wave of negativity that will sweep over the comments on the release.

Being that Star Wars Card Trader’s rankings have trended down since the hype of the movie fizzled out, alienating more users might not be the best move. It might have been better to gradually start creeping up the standards to make sure the community had time to catch up, and now that is out the window.

I also think that communication in the articles about increased standards in the future would originally have helped people figure out that its not going to be 100 white forever. Instead of saying, “we can get a bunch of extra money TODAY by doing this massive jump,” it should have been, “If we tell people things are going up and all colors are needed, we can get more money over a longer period of time.” The app has seemingly lost sight of long term goals for spending in favor of sharp shorter increases in spending due to decisions of this nature. As they say, slow and steady wins the race, and SWCT has become the hare, not the tortoise it should be. We know who comes out on top in that competition.

As mentioned prior in the post, Rey is the most popular character in the game. If you search “hoard” in the fan feed, the Rey collectors vastly outnumber any other type of other collector. Ratcheting up the requirements for THAT character without warning is going to make more people angry than if it were a lesser collected card. Starting a few weeks ago with a different example might have been much easier and less unpopular.

I think the team needs to remember that this game functions on standards and expectations. There are times where this aspect of the community should be ignored, but it needs to be clearly communicated. I understand that urgency is important in increasing the daily spending from the users, but I feel like it doesnt need to be “GOTCHA!” for that urgency to reach a fever pitch. The whole “GOTCHA!” mentality only furthers the community’s negative perception of their experience within the app, and though they dont always see the forest or the trees, its still bad.

Employing a catch once in a while isnt a bad thing. Sometimes the app needs a course correction. When it becomes the rule, that’s when its a problem.

With BB-8 today, we saw lesser requirements in place, but still a lot of different cards above white that are needed to shred for the offer. I think its safe to say requirements will continue to change, but also that its time to adjust your hoarding behavior as well. If you want to qualify for the hoard based offers ahead, its going to take more than just white. Even if the cards end up changing, being prepared is much more important than getting caught with your pants down.

Try to diversify your main hoard, and maybe use those characters you have built up over the last few months to fund your characters you actually care about. If you are hoarding 9 different characters, maybe shrink that down and use your excess to get the blues, reds, greens, and oranges. It can be done, and that journey should be fun.

If you have gotten bored with bringing more and more of your mini hoards up to 100, you now have a new goal. Definitely worth putting in your effort if the cards end as low as Rey did and BB-8 will.

In closing, I have one piece of advice for any of the Topps apps. When there is a question of future requirements, ALWAYS overprepare. You think you will need 100 cards to get an award, but arent sure?  Collect 200. If you think you will need one color base to get to the finish line? Collect 2. If you choose to be a free player and operate under uncertain standards, realize that there will come a time where you will be left out. Its not worth getting upset over, as you are the water drinker at a table of people ordering bottle service. You shouldnt be surprised when the VIPs get invited to the champagne room and you are left behind. Im not saying that should incite you to pay, but its a consideration for your perspective on who is important to the business owners.