How Will the 2016 NFLPA Rookie Premiere Impact Huddle?

This is a big, big week for sports cards, especially on the physical side. Every year in late may, the NFLPA invites the top rookies of the class to Los Angeles to don the uniform for the first time. Many people will be there to take photos, meet the players and get content for the season. For the first time in decades, Topps Physical will not be represented. However, unlike previous years, I would expect that Topps Digital will have a reason to be present and involved.

After the event last year, we got a lot of content surrounding the rookie premiere. A LOT of content. Because the app was not yet licensed by the NFL, the cards focused more around the behind the scenes than it did on the field. Now with Rookies able to be pictured in their NFL uniforms, all of that can change.

Content will likely not be in the app immediately after the event is over, but once all the editing and approvals are done, look out. I can see this being a welcome source of rookie based content for a long time, and with lots of team collectors HUNGRY for full uniform cards of their team’s draft picks, it should be a blast.

If things go the way they did last year, we should see content that hits all over the spectrum of value and cost, something that might continue the “Road to the Draft” type of theme they have been running with since the combine. I cant even put into words how excited I am to see what they will come up with.

For me, its all about the super premium content that might be on the way, as that was the plan coming out of the NFL draft. I would love to see a rookie premiere signature series, relic series and maybe even Limited series come out of this, as for right now, the rookies are the most alluring part of the offseason there is. 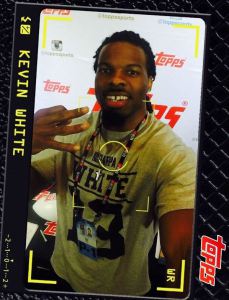 No doubt, Huddle’s content has been so incredible these last few months, that I am putting a lot of trust in them to continue delivering compelling content. I have a feeling that this is going to be something you will NOT want to miss.

Here is a list of rookies that are scheduled to attend, including all the top picks and even a few surprises.