A Big FOTW Thank You!

Over the last few months, Bunt has been soliciting nominations for Fan of the Week on Twitter, and much to my appreciation, there was a HUGE response from the readers here in getting my name nominated. All of those kind words resulted in being named Bunt’s Fan of the Week this week, and I cannot thank all of you enough. 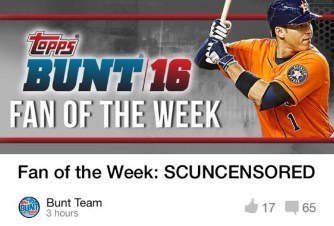 If there is one thing I learned in the Topps apps, its that the people make the game what it is, almost as much as the game itself. That means that the generosity and passion that the community displays is just as important as that insert or sig.

I wanted to personally thank all of you for your congratulatory messages, and for the Bunt team on granting me this honor. They have been 100% supportive of Digital Card Central since its inception, and for someone like me, that is a big deal in continuing to be an influence over the people that read my blog.

Most importantly, I didnt start this site to be the FOTW, or even to be the recipient of all the things that my readers have given over the years. I wanted to help people get an edge in a game that isnt always easy to figure out. I wanted to make sure there was a resource out there when you search for help on Google. Although I think Topps makes great apps, onboarding new users has been something that can be a trial by fire for some people. It sure was for me.

The continued readership only solidifies that there is a need for a voice out there, and its not mine that needs to be the only one. I hope others take this as a cue to share their thoughts and be their own beacon out there for people to find.

Thank you again everyone, I cant tell you how much this means to me.