Breaking Down the New SWCT Marathons

This is a good time of the year. New base, new beginnings, and with that, new marathons! We have already gotten a taste of what is in store, and Im still not completely sure if there will be another that is announced in the next few days. So far, we have a good amount, and I wanted to take some time to start with my thoughts on each.

Being that this looks to be a completely new set of marathons, without root in previous sets that were converted over (film quotes last time, etc), it feels like a great fresh start to really get going. 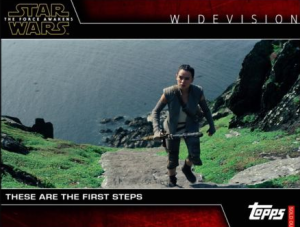 Man, I have been waiting for this for a LONG time. Not only that, but the first card in the series is pretty freaking awesome. I think there is huge potential here, and I think as long as we get Kylo and Han on the catwalk, ill be good. Either way, this set is the one I am most excited about, and it keeps in line with the rest of the widevision marathons we have already experienced. 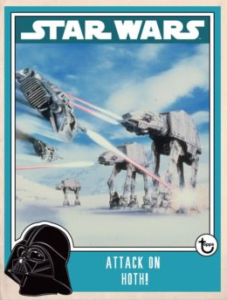 I dont really understand the name of the set, but I love the concept of the retro look and the artsy approach. Considering that the set is only in packs for 24 hours, and has pretty long odds, its no surprise that these are being traded for extreme value on the feed. I have high hopes for some of the iconic scenes that we should be getting, and these could end up being one of the more valuable marathons in quite some time.

Obviously, this is a great concept, and also a cool design. I think that this could end up being quite interesting in the way they show the progression of some of the characters that have gone between the movies, or even between the original trilogy and the prequel trilogy. I think that this is definitely in the vein of connections, which I loved the during the first set of marathons in the app, but with a fun twist.

I am glad that we continue to see fan’s choice as a part of the game, but the new format is horrendous. Making people pay to vote in a set that has always been geared towards a cheap thrill of a release is going the wrong direction. Although there were some distribution issues last go around, I dont think that is reason to diverge from that path.

I love me some droids, and this set looks to be pretty much playing right to that. However, considering that the previous droids set was basically forgotten by much of the community, im not sure how well received this will continue to be. That being said, the cards look great, and I am definitely looking to pick up some of my favorites along the length of the set.

Another fun part of the Star Wars Universe gets to star in its own set. Im sure there are a lot of people who are excited about this, but I just dont really like the way the cards look. I would much rather see the creatures in action, and maybe that could change as we get further into the set. I would love to say this gets me going, but its just not up my alley as it stands. This could end up as one of the lesser valued pieces during this group of marathons.

Ill have more info as the new marathons take shape, but so far this is looking pretty good. With Vintage seemingly gone, its going to be a wild card how people react to the replacements. So far, so good from what it looks like. Putting timers on the marathons is kind of a bummer, as it prevents double dipping, but maybe it can prolong value if things sell out low. I cant wait to see what is in the pipeline, I guess we will just have to wait and see.

2 Responses to Breaking Down the New SWCT Marathons