A Quick Look At the First Inserts in UFC Knockout

We are through the first stages of the UFC launch, and for many of the MMA fans out there, it has been a pretty fun ride. With UFC 200 coming up, the app’s launch could not have more perfect timing, and I think that for the most part, the first few days have been a quality introduction to the app, with lots of free stuff and a whole bunch of cool looking cards.

Although we only know of two insert marathons, surely more to come, the designs have been right on par with what we have come to expect from a Topps digital apps. So far, the lack of paywalls, the cheap packs, and free cards are exactly the way a new app should be launched. As more apps are developed, I hope this is used as a road map.

Much like the Opening Day set, Knockout released a set of cards geared towards the launch of the season. These cards are modeled after the base cards with a special logo for the people who were on board at the beginning. Not only did Topps offer upwards of 100 free copies in various packs, but there are a ton of them to wheel and deal as the app gets going.

Although I think the launch week logo should be much smaller, the concept and pack out structure to make them accessible is great. 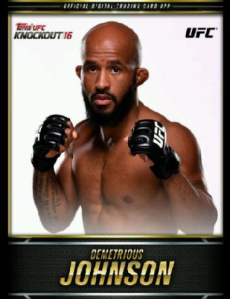 As we saw with Huddle and Bunt each year, the app puts out a set of cards designed to help new players understand the concept of inserts. Even though many of these cards end up being super annoying in blind trades later on in the year, they are almost a necessity to assist these users with getting the feel of the game. I think that the look of the cards exceeds that of the other two apps, and maybe even the rest of the inserts released during the first week. Not bad at all!

As the country prepared to celebrate the 4th of July, American Stars was the first insert chase set to be released. It focused on the top fighters born in the US, and the cards looked awesome. Being that I am brand new to UFC in a lot of ways, seeing a few names in the set that even I recognized was a good thing. This was another set, released during week 1, that featured posed fighter photos instead of the action shots that I wish were more prevalent. I hope this changes as the weeks progress, because its clear that dynamic photography should be at the center of this app.

As a fan of WWE growing up, I almost watched the show more to see the flamboyant entrances than I did anything else. UFC is a bit different, obviously, but I still love the concept of this set as a marathon. The cards look awesome, and should feature some really cool shots of the fighters coming to the octagon. So far, this is the set I was most excited about and it was nice to pull the card in the first few packs. 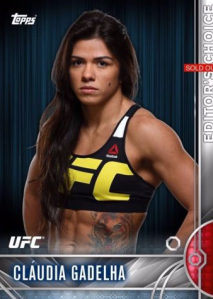 A staple of all the apps, Editor’s Choice is here for Knockout too. The design is understated and looks pretty good, and should be a cool set to chase. As mentioned prior, using the publicity shots for the fighters is something that is going to bug me, if it continues to be a trend. I wasnt familiar with the subject of the card, so I really didnt chase it this time, but I will dive in head first if Macgregor or Johnson gets a turn.

Im guessing these will be the first of a few different UFC 200 sets, and I must say, this is a great looking set. The simplicity of the look really makes for some pretty stunning cards, especially for someone as beautiful as Meisha Tate. The ramp up to the big event is going to be a crazy ride, I have a feeling, and I cant wait to see what happens as we get closer to fight night.

As mentioned, this is only a small sampling of what is likely on the way. Regardless of my lack of knowledge surrounding MMA, I am pumped to see how this app continues to grow. I dont think we have seen the top marathon quite yet, but I really like where this is going.