Now that the all star game is over, I want to spend some time breaking down thoughts on some of the sets that were released during the last week. Some were definitely among the best looking cards this year so far, and the Bunt team has to feel good about the way everything turned out.

This is a set I have put together for the last three years, and each time it gets better and better. I absolutely loved the design in 2014, and 2016 is definitely a step above that. I also loved that they separated out the expansion cards, so you didnt have to go diving through a sea of duplicates when you are filling out the set at new players being added.

Another awesome idea from last year, and this year I think it was just as good. The gold separation design did a good job of separating the live cards from the original set, which was a point of confusion last year. There was a good share of great moments from top players, so this was something that I hope gets brought back during other events too.

For both the pre-derby and post-derby sets, I loved the design, and the photo choices were spot on. The Giancarlo stanton relic card for the post derby set was especially cool, and like last year, the relic stands above most of the cards released for the entire all star weekend.

Although there was a bit of outrage about the list of people who ended up getting a copy of one of these cards, the live signature videos with Noah Syndegaard was worth all the headaches that came after. I really liked seeing how the digital team got these cards taken care of, and as I mentioned in my article prior, I hope we see more of the live signature concept. 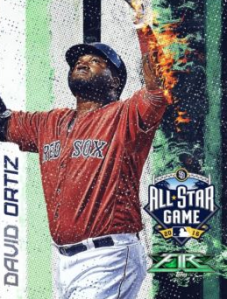 This was probably my favorite set of the weekend, and I absolutely love seeing the different designs Tyson Beck comes up with for Bunt. He is getting some major traction with the community and his sets, and I cannot wait to see what is in store for the future. Even the parallel concept worked well for this.

The dual cards and retro all star cards from past years was a fun treat, and I always like seeing cards like this that were in a binder when I was younger. Although the checklist was a bit dated because of when the cards were released in the early 1990s, you just have to appreciate the content.

This was a no brainer to me, and I loved seeing all the different jerseys that were featured in the set. Some big names also, and the award card was freaking sweet. Overall this one probably got lost in the shuffle a bit, but it definitely deserved any hype it got. Love this set.

As mentioned in prior articles, the ASG is probably one of the biggest events of the year for Bunt, and 2016 was definitely no different.