The newest thing that Topps Digital has brought to the landscape is live signatures, or players using an iPad to sign the digital cards with an apple pen. Basically, the Topps team presents a photoshop document of the card, and the player “signs” his signature over the layout.

With the All Star Fan Fest in full force, Topps has put a crazy rare offer together of Noah Syndergaard personalizing live signatures to fans who pull one of the tickets. Obviously, these tickets are about the toughest pull in the game right now, so its clear that they would have value regardless. The question is, if Topps has a way to get most of their autographs “live signed” will those carry more value outside of the rarity and prestige already associated with the card.

Right now, both Bunt and Huddle have used the live signature concept, both with quite positive results. Huddle’s live signatures at the rookie premiere might be some of the more awesome looking cards in the game, as the minicamp series they signed were already cool looking to begin with. The players also signed live sigs on less design focused cards, using inscriptions and drawn plays to increase the collectability. They havent been as well received. 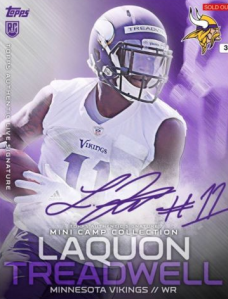 Although I think the CONCEPT is a novel one and should continue to be used, Im not sure it does MORE for a card that is not already a part of the value. That doesnt mean the team cant use alternate methods to make the cards more valuable, I just dont think the live signature itself will do that much more.

In terms of Syndergaard, its clear that Topps is looking to involve the fans a lot more in the actual signing of the card, bringing personalization to the table. Although its unclear how it is going to work out when completed, its another cool way to get the fans closer to the cards in their collection.

Thor is in the house. We'll be putting videos of the personalized live sigs on here soon! @Noahsyndergaard #FanFest pic.twitter.com/rlxkkfpBhn

In the end, its going to depend on the team to deliver compelling content regardless of the signatures themselves. Design and dynamic looks will always be more important to the aesthetic of the card than the autograph, and the real value indicators of card count and player will be the prime factors.

I like the concept as said above, and hopefully the team has more fun planned soon.