Training camp is underway! We are finally ready to get back to business on the NFL front, and I literally could not be more pumped up. Football is life for me, and with a new NFL season comes a new quest in Huddle. When the new build eventually hits, there are a few things I would love to see.

Establishment of a Brand

Im not sure if you are all aware, but this is the first year that Huddle will be operating without a brand on the physical side to mirror. I dont actually say that as a bad thing, because its clear that digital has created enough of a fan base that they dont need the support of brand continuity anymore. They can do this on their own and people will flock to the app per usual. That being said, this is also a real opportunity to establish Huddle as Topps’ brand for football above and beyond anything we could imagine. Create products, continue the ones we love, and make them a digital party. For lack of a better term, this is a make or break year for Huddle, and they need to knock it out of the park. I am confident they will.

Before we go any further, the design work done over the course of the offseason needs a round of applause. TOPPSCOREY has shown that he is worth his weight in digital gold for this app, and his work is nothing short of incredible. Each new set is better than the last, and now that we are a few months (years in digital time) into his tenure, he has settled in and created some stunning work. As mentioned above, this year is about pushing digital past the limits of the original Topps football physical sets, and showing that Huddle can be a player in the look and feel of cards across the entire hobby. Of any of the things on this list, I think this one is on lockdown, so really no worry needed. I cant wait to see what Corey’s take on the base design will be.

Adjustments to the Marathon Structure

One piece of the pie last year that really struggled was the way the marathons were built, as too many copies per card were released at once.  With the new season comes a new opportunity to take a different road, and I dont think veering off the path from the way things were done this offseason is a good idea. Keep with what has worked, as people really seem to like the structure of the marathons during the summer. The only thing i would consider is adding some rigor around the first few weeks of the app, so that on day one of the release, Huddle is ready to go with the first program, and start the year right. We had a big gap in that last year, and nothing pisses people off more than having to wait for inserts. The season is so short, the team literally has no time to waste. Get it going fast. 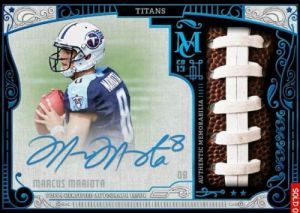 Im not going to get on here and say that Museum isnt awesome. Im not going to say that Fire wasnt fun and cool. I am saying that the size of these releases has given people quite the hangover, as set after set after set hits the sheet. Doing a box based format is awesome, but doing it in ten waves is not going to work in keeping the community engaged. If Huddle wants to release sets like this, I would support it, but do it in less time with fewer waves. We want to see fast and furious, not a slow, plodding approach to a set. When the season starts, its go time.

Where we see Bunt having major issues, Huddle has really seen a lot of success. The contest scene on Huddle is hot, and the boost culture in the app has a lot to do with it. Last year’s structure through the season was fun and kept me interested through the Super Bowl. At the same time, releasing boost after boost will only keep people in the game if there is something that can be done to keep things fresh. That means new checklists, new photos, anything to avoid the idea that the team is just slapping a new colored border on an existing card and calling it a day. Approvals may take forever with all of the apps, but spending the time to refine the approach will pay enormous dividends.

Similarly, the contests need to be built around what makes Huddle awesome. As long as the setup and prizes reflect the effort it takes for a user to place high, you will see people want to join in regardless of cost. This CAN be a major money maker for Topps if done right, and the ripple effects can be huge for a successful approach. Bunt has seemingly botched the contests over a long season, and Huddle doesnt really have that same issue. There are 16 weeks of regular season and another 4-5 weeks of playoffs. It should be easy to sit around a conference table and map out a winning contest journey for 2016. Hell, crowd sourcing the ideas might not be a bad way to do it either!

Overall, Huddle has been a blast over the last few years, and I wholeheartedly believe it will continue to be. All bets are off with the physical sets in the can, and this is their time to shine. If the team can do some great things on the points above, this will end up being a banner year.

1 Response to Five Things Huddle Needs for the 2016 Season