Posted on February 6, 2017 by SCUncensored

Its over. Its done.

I need to catch my breath because the game ended up being one for the history books after a relatively boring first half. Luckily for all of us that were playing for points, the game didn’t turn into a blowout, and we got a treat for the ages. Huddle really brought the heat as well, dropping some major goods along the way, including a new “type” of card.

Although there was sadly no new technology used to release these cards, the design used for the presentation kind of made up for it. In the style of the Super Bowl base cards, Huddle released a bunch of awesome signature relic cards, some with up to 6 signatures. The cards aren’t limited to the point where they are unattainable, but good luck trying to track one down for your collection if you don’t have some firepower to give.

This actually opens up a lot of potential for the app moving forward, as they can utilize this type of format to highlight the physical cards that haven’t been able to be used in the app to this point. It also gives a bit more fun to add spice to releases, and hopefully bring more worthwhile super premium content to the fray. If you aren’t a physical collector, its time to go check out what booklet cards are all about, maybe even get a preview of what might be coming as the offseason progresses. Inception anyone? 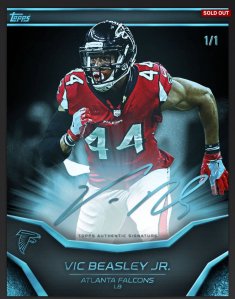 Other than crazy boosts, nothing gets people going in Huddle than 1/1s, especially when they are built around popular signature sets. Completing the signature marathons in the platinum parallels were a fun chase to add to the booklet release, and had me going nuts buying packs im going to regret later. The previous batch are some of the most valuable cards in the app for 2017, and im sure that is why these are back.

In the spirit of the on demand way that digital has made a name for itself, Topps already released a special Patriots champions card that was only available for the people who stayed on through the end of the televised celebration. It was done to match the base cards, much like the booklets were, and may end up being one of the more coveted “base” cards released during the night. Don’t worry though, im sure there will be more variants available as the week progresses, but this was cool to see so soon after the game was over. Great work to have this done ahead of time. 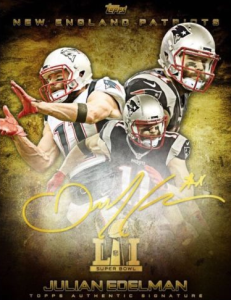 This is where I really was happy to see things go, as I was waiting for the high end signatures to hit in a major way. To see the Ultimate Bundle include some crazy rare and heavily boosted cards in the drop, I would have really liked if it happened a bit earlier. Limiting them to 10 will keep them valuable through the rest of the offseason, and if you were lucky enough to get a good player, hang onto it. The Brady will be hard to come by.

Being that it was Super Bowl weekend, many NFL players and vets descended on Houston to celebrate with the league. Topps took full advantage and got some cool cards done with live signatures to be released in the app. They included some awesome signature relics, and sequentially numbered Inception gold autos that were all really well done. Great idea to take advantage of so many players in one place.

The Huddle Bowl Ends As Close as the Game Was 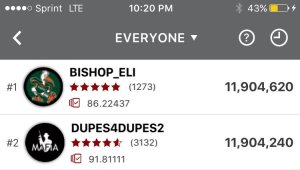 Although technically, its not the Huddle Bowl anymore, the Postseason Challenge was decided last night by less than nothing. I would say, with the way the scoring was separated by 400 points, that’s the equivalent of less than a yard in scoring. Absolutely insane that after so many weeks, it came down to that few points in the end. I managed to finish 14th after missing a few games during the run, something im pretty proud of. I did end up with some nice contest prizes in finishing 8th in the premium contest, but nothing like the two guys that came out on top. Both got a 1/1 Gold Sig, with Bishop_Eli getting the Brady gold for his collection. Amazing stuff.

Overall a pretty amazing night with some sadness in tow. Football is over, and its now onto the draft, my other favorite time of the year. Hopefully we continue to get some amazing stuff that way as well.