Bunt 2017 is Here – Questions are Plentiful

Ladies and gents, Baseball season is upon us, and for the first time in a long time, my excitement on a new year is tempered by decisions made seemingly out of left field. As much as I want to be excited about 2017, I feel like recent revelations have made my own feelings on the new year a bit less about getting elbow deep in the new features to more focused on seeing how the general population reacts. So far, saying it hasnt been pretty is an understatement.

First, it looks like the app is getting a pretty big visual upgrade, and new look for 2017, even though the features are relatively flat. The overall structure of the game is relatively the same, but things definitely look more focused on interface for the users. 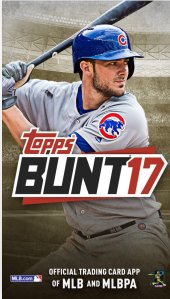 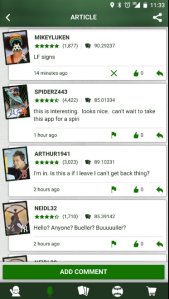 We also see that there is a new feature of sorts coming soon, and it looks like a new form of a gameplay mode that may not be focused around contests. This is good news, but considering how much work still needs to be done on developing app features, im not sure this is the right direction to go.

Rightfully so, Kris Bryant is the official cover athlete of 2017 Bunt, which I fully support. No one is better than the MVP and World Champ. I think that the base cards will follow suit as all the updates we have seen are really nice in visuals, but less so in functionality. The design team really is Topps’ best asset.

This is where things get quite hairy.

To start, card counts on inserts that are not LE will be removed from visibility, something that makes absolutely no sense. Not only was this structure reviled in Skate, but it will be even more so in Bunt. Card counts are not the enemy, and I warn against doing anything to piss off the users in a time where everyone is still wary of what happened with the app’s trajectory last year.

Bottom line, the primary goal should be bring more users to the Topps apps. The secondary market value on eBay has crashed for a number of reason around non-LE inserts as it is, but that is far from a reason to make such a trivial change on something that is bottom line functionality for users within the app. This wont bring new people to the app, and if anything, will further contribute to a lack of value in anything that isnt 10 count in the apps.

Open edition cards, as it is, are a worthless trick to extend pack odds and take weight off the design team to build new cards. Its good for Topps, because it means they can pump packs full of junk while not really adding true valuable content or new features that bring the apps forward on a regular basis. Its time to find ways to make the apps more enjoyable to play, rather than continuing to add content in this fashion.

Removing the card counts only makes this worse in an app where ripping packs and collecting sets needs a value marker for both vets and rookies alike. There is an argument that not all cards are serially numbered on the physical side as well, but at the same point, more and more are being built that way to overcome the steep decline in hobby participation over the last two decades.

Let me put this simply:

If people hate it, and it doesnt have a reason in the technology that it has to exist, why does it exist? WHY PISS PEOPLE OFF MORE IF YOU DONT HAVE TO?

Overall, this season will be a true test of the resiliency of the Topps Digital team to overcome hurdles they have set up in previous years. All the primary statistics that show department health are on a decline per the public app statistics. Downloads are down, spend rankings are down, daily active users are down. If Topps doesnt see that developing the new product features is a primary driver to curbing this decline, they need to wake up and fast. They need to cherish their users, not deliberately make them upset. They also need to captivate our attention, and new sets and new cards dont have the massive ability they used to. This format has been going on for too many years for new content to a driver. It has to be new features. That is the answer to all that ails. Until that is ready, stay the course, dont rock the damn boat.

Again, ill wait and see how Topps addresses this, but it needs to be addressed. I would hate to see things continue to peter out instead of becoming the next big thing it deserves to be.

9 Responses to Bunt 2017 is Here – Questions are Plentiful