Topps did their best to get you opening packs yesterday with some major new inserts, many of which got me very excited. Here is a breakdown. 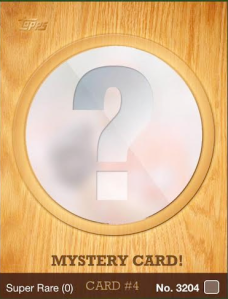 These were some VERY popular cards when they did them last year, and they are looking extra cool this time around. These could replace the signature series release this week, so dont hold your breath for a new sig. Basically, these cards will eventually be revealed to be a player next Tuesday, but you wont know who until then. Many are hoping they will be guys that are not yet in the game, like Tanaka, Abreu, and some of the other pitchers, but they could be retired guys as well. I would not trade my sigs for these, but others with dupes might. If you pull one, as for a king’s ransom.

I really like this set as I have said, but when we start getting into the third card in the set, and its Brandon Phillips, it wont carry the same weight as some of the other new inserts from new sets. Phillips is a nice card because he doesnt have many other examples in the game, so he will be a bit more valuable until his base card comes out.

Rizzo has been great as of late, and this card is only the second insert for him (Opening Day). This is one I would be happy to pull, but in a week, the value will drop considerably per the record from the other cards in the set. I still like the idea of giving the Fan of the Week a choice of their cards, and this was a good one.