With all the daily releases as of late, it is really tough to stay on top of my write ups. Here are some of the bigger cards that have hit packs as of late. 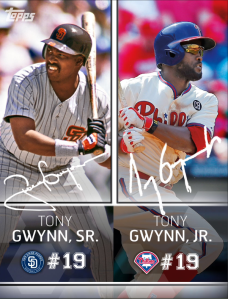 Going with dual signatures in Bunt is a no-brainer. They are cool, they have a lot appeal as sig cards, and they are rare. This one is the first to combine an active player with a retired player, which is interesting. Putting Father and Son on the card is a cool idea, and I would expect more Father’s day type chases coming up.

I am a huge fan of this choice for the Royals. Although they are a faceless team for lack of a better term, Ventura is slowly emerging as an ace for them. He may not ever reach the top of the league’s consciousness because of where he plays, but his fastball will get him some Ks and points for anyone who pulls this. The only drawback is the rarity, which isnt very limited at 800 copies. Dont give up the moon, but maybe a star or two. 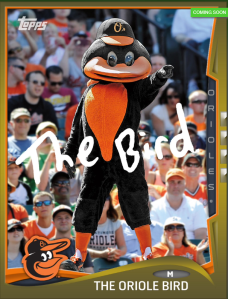 Although they can be a polarizing subject in bunt, I like the Mascot cards a lot. They are fun and quirky, and really break from what we normally see in packs. As a chase, this sig is odd, but that’s what makes it cool. It came out relatively rare at under 300 copies, but its appeal may be siginficantly more limited depending on who you are trading with.

This card has been in packs for a few days now and only 23 have been pulled. Insane. A lot of people want the Jeter sig reward, but it may not be many people unless more of these are pulled. I like the Turkey Red series a lot, but this card is eluding the best of hunters right now. I saw someone say they dropped 250K coins on 2500 coin packs and come up empty. That’s rare.