Continuing on the theme from earlier today, I think its definitely worth talking about some of the big chases for each type of player in Bunt. Because the two types can be so different, but have overlaps at the same time, its worth having this discussion.

What you will have to trade: 7-9 top sigs, if not more
Why is it list worthy: First sig release, and lowest sig card count in the game
Notes: Sigs run the trade economy, and this card is pretty much all locked down except for maybe 1 or 2. Being that its the first sig, there is also a significant chance there are dead accounts that own this as well. Because there was a huge influx of users that signed on for week one and left the app, its possible they could have pulled this card and walked away.

What you will have to trade: 6-9 top sigs, if not more
Why is it list worthy: Lowest sig card count in the game
Notes: Jeter is Jeter, and easily one of the most popular players in the game. Being that this was also an initial release means that there are a ton of people who want a shot since joining later on in the season. Its slightly one step below Trout, but they are like 1 and 1a on this list of game value. 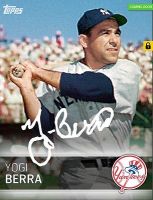 What you will have to trade: 5-9 top sigs, if not more
Why is it list worthy: Reward for having all sigs, which includes two above cards
Notes: To get either one of these cards, you needed to have collected all sigs 1-10 and 1-20. Because there are only 100 of Jeter and Trout, you can imagine there is a very short list of people that have both those cards, including Verlander/Kershaw at 250, and Fielder/Stanton at 200. This makes those cards impossible and rarely up for trade if ever.

What you will have to trade: 3-4 low count sigs
Why is it list worthy: Potential to be highest scoring points card in the game
Notes: At just 250 copies, this card is an absolute beast. Not only does it score the equivalent of 2 gold SRs, but Felix is one of the best at his position. This means he has the potential to clear 1k points per start with this card, and that is nothing to shake a stick at. Adding to the rarity is that some of the big points scorers have multiple copies of this card, which means there are less to go around.

What you will have to trade: 2-3 low count sigs
Why is it list worthy: Rare and top points card
Notes: This is not a pack pulled card, which makes it even tougher for most to come by. This was given out to the Black VIPs back two months ago, and because most of them play for points, they were rarely up for trade. When they do come up for trade, they go to other users who need them, so they are close to impossible to find cheap. This card actually can score 1k points on a good day with out another 1x boost like Felix, but the lack of a sig on it makes it slightly less collectible for the first group.

What you will have to trade: 1-3 low count sigs
Why is it list worthy: Rare and top points card
Notes: Like Kershaw this was delivered to Black VIPs a few months ago, and that means its rare. It was also during a time where there were significantly fewer black VIPs which means there are far less to go around than Kershaw. Even though Cueto has been slacking on his last few starts, he still has potential for big point totals. That makes this card worth picking up.