Black Friday in Bunt and Huddle is Looking Epic

Black Friday is upon us! Not only are there a bunch of sales in progress on Bunt and likely coming on Huddle, but we are also going to get a bunch of new releases too. We have already seen the big reveal on Bunt, and it is a doozy. We are also awaiting the final sig release in Huddle to complete the Thanksgiving set, which is shaping up to be the rarest sig in the game.

For Bunt, we have the release of the first (and likely not the last) Babe Ruth card, and its the next of the HOF signature series cards. Its not only going to be ridiculously valuable card, but it will be rare as ever. Babe Ruth is easily one of the best players of all time, and to see that he is getting the signature treatment is absolutely awesome. It makes it worth it to chase down the 12 Marathon cards. 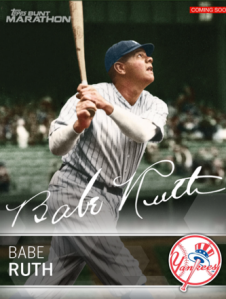 Adding in the Deion Sanders Black Friday card that came with every million coin bundle you purchase at the reduced price, and I think this is shaping up to be quite the day in Bunt. I realize I sound like an infomercial salesman right now, but I am actually that excited about this program. BUT WAIT! THERES MORE!

Huddle will be releasing the final of the four sigs today, and if I had my guess, it would be one of the Cowboys. I am also going to assume that the reduction in count with each sig will continue, making this the rarest signature series card ever put in packs in both Bunt or Huddle. WOW. If this card is a Cowboys sig that counts toward the set and if it is 50 copies, this could be ridiculous. Get your running shoes on.

I would also expect some major pack sales to happen, as it is Black Friday and Huddle definitely wants to keep up with Bunt. If you have been saving up your coins, today is your day to spend. Go nuts people, as this day comes but once per year.