I remember back when Huddle released the Calvin Johnson Black Boost and Teal boost. We were all in awe of what it looked like and how big the point value could potentially be. Now that we have completed the boost chase for Sage, Yellow, Mint and Chocolate, its really interesting to look back and see how far we have come.

Today, at the conclusion of those chases, we saw that Huddle really did save the best for last. Not only were there some major cards awarded to the few lucky users that completed the chase, but the cards are easily some of the most powerful ever created in any part of any of the three apps. That’s impressive.

They all look quite incredible, and its clear that anyone who was lucky enough to track down every one is going to be very happy with how they turned out. Man, I wish I had the means to get one, even if the players end up eliminated after tomorrow. The cards are just that cool. 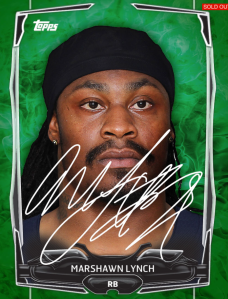 Fire boosts were already my favorite cards in the game. They are so freaking boss looking with the way that they are done, and this one takes the cake. To see that this set paid out a player that is as valuable as Lynch is, well that’s why you do these chases! This card could end up being the star of the show come Super Bowl time, as the Seahawks are easily favored to beat the Packers. I dont have words for how cool this is. My only complaint is that Huddle continues to use the messiest Lynch signature copy I have ever seen, instead of the cleaner one used for the Holiday Parallax Sig, and other sig released to start the year. Full circle on that, right?

Its hard not to love Gronk. Not only is he a cartoon character in his persona, but he looks like one too. This card is about as cool as it gets, as Fire makes everything better. Like Lynch, the Pats are favored to advance, which means that a 20x Gronk card could be one of the most valuable tools as Huddle closes out the season. Gronk’s sig helps the visual appeal of this card, as he has a stylish way of signing his long name. I always loved cool looking autographs, one of the main reasons I collect sig cards the way I do. Wow.

Tripmode was the only person who completed the Mint chase, which should come as no surprise. Being that he was the only one, this Brady turned into a 1/1, which makes it that much more cool. I really like the way this card was done, using the diamond pattern on the border, and the foil type background on the card. It just pops. Considering some of the mints are as low as 1 or 2, he deserves his prize.

Im not a fan of the Chocolate boosts. Im just not. I think that they occupy a very similar place in the collecting economy as the mint, and really didnt add much to the overall chase. This is also the only card that doesnt seem to work out as well with a Brown sig on a Brown Background, with a clashing gold background. I dont know, maybe its just my own jealousy, as I would not scoff at a 1/1 Russell Wilson boost sig with a 15x attached. That makes this card cool. Visually, its the one Im not sure how to feel about. Tripmode wins again, and like the mint, he deserves it.

I never thought I would say that I am sad that these boost chases are over, as they really did a lot to make the game fun this year. Even if you were only able to afford buying a few boost packs here and there all year, the gameplay was more fun regardless. Next year’s Huddle still hasnt even become a twinkle in the eye of the app producers, but I hope that some element of this is brought back.