Since the launch, we have gotten our fair share of brand new cards, including our first few sets of the year. So far, everything has been extremely fun, and I expect its only going to get more intense as we progress towards Sunday night and Opening Day. Here are some thoughts. 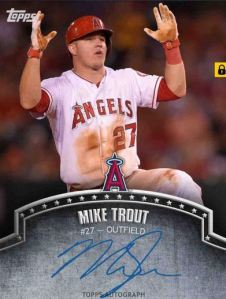 Last year, we had a very similar situation with Mike Trout leading off the sigs as the spokesperson for the game. At 100 copies in 2014, the card was so valuable, that few other cards could even be bundled together to trade for one. Seeing what we have for 2015, it might be a very similar situation, as Trout is not only a rare sig, but also an EXTREMELY popular player. Right now, there are no 9 2015 cards that can measure up to trade for this card, but offering some major 2014 cards MIGHT get the job done.

Ted Williams From the Vault

This looks to be one of the first weekly sets of the year, possibly replacing Golden Moments or Throwback Thursday. This particular card is the 1985 Football design, which is one of my favorites of all time. Over the last few months, I have pleaded with TOPPSMARC to use this design in Huddle, and I am glad it gets the spotlight in Bunt as well. Great looking card, and a very cool series. They are trading super well right now because there is just nothing else available at the moment. Either way, I still think this is one of the best looking HOF player card in Bunt I have seen in a very long time. 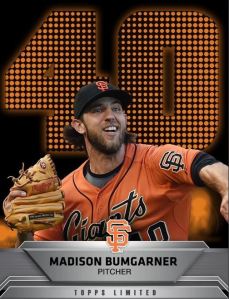 These cards were available throughout the offseason, and I am glad to see they are back for this year as well. They are so extremely rare, that player and team collectors go nuts. This leads to a feeding frenzy over the packs and cards, and a huge amount of trade value on the open market. Good luck trying to track one down without giving up the house, especially with how popular MadBum has become in the game as the World Series MVP. Great set.

I liked this series when it was used to celebrate the season awards in Huddle, and it looks really good in Bunt in transition. The theme of the set is very interesting, as they are trying to showcase a player when they first entered the league. Of all the inserts released so far, I dont see this one trading as high as some of the others, likely because the reward card for the set has already been revealed as Alex Rodriguez.

This is one of the first sets of the year, and it looks really really sleek. Its a crisp looking design, and so far, the checklist has been top notch. I see this set being extremely collectible with each card only being 350 copies, so gear up if you are going to chase the Trout gold reward card. 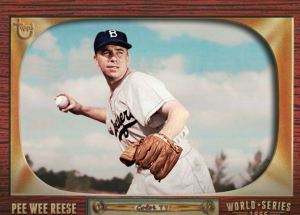 Our first horizontal cards of 2015, and ones that celebrate the heritage of the game, much like it did last year. The TV design as always one of the more iconic Topps sets, and its cool to see it in Bunt format. Making it horizontal allows for the presentation to be appreciated in full, and I compliment the team for making that call. The 1955 world series had a lot of big names in it, so this set should be pretty cool to see play out.

To be completely honest, this set was a disaster in 2014. It didnt look very good, it had the posed shots from Spring Training and no one wanted them. This year, the card design has improved about a million percent, but the high card counts will kill the value over some of the other insert sets already out. This set is one of the “community focused” types of approaches, which is deliberate to make the cards easier to pull for people who dont want to spend 200k to get one. Not my thing, but at least they look good.

Check back for more coverage as the week goes on, as there will be many more inserts available throughout the first few days of the season.