Posted on September 14, 2015 by SCUncensored

When you sign into Huddle, the game can seem daunting, no doubt about it. The great thing about the game is that it is meant to be highly interactive, so its in your best interest to learn as much as possible as quickly as possible.

Today I want to dive very deep into contests and scoring, hopefully to shed some light for people who arent as familiar with how to play along with the live games.

First off, if you only have access to NFL.com and the main games on national TV, you will not be as successful as someone who has Sunday Ticket, or spends their Sunday in a bar. Red Zone channel is a huddler’s best friend, and without it, it will be tough to play beat someone who has both.

I will always pay more attention to Red Zone than my tablet with the NFL.com feed, as the API that runs NFL.com or ESPN.com will never be live. The reason this is so important is because it will allow you to get your cards into your lineup more efficiently before points hit the app. Ill get to that in a second.

The contest screen is the home base. Clicking on the oddly positioned dueling helmets will take you to the screen.

Here is what everything means.

Starting with the Join Now screen, you should pick a contest or contests that you feel comfortable in playing. As of week 1, there are contests for each night game on Monday and Thursday night, as well as 4 contests on Sunday. You can play in all of them if you would like, but I will warn you that it will be hard to manage two lineups at once. For a rookie player, I would stick to one at a time.

Its the easiest to play in the segmented contests, as they dont force you to participate ALL through Sunday. For Week one, I played in each of the segmented contests, with extreme focus on the noon games. I didnt play as much with the afternoon games, as we had stuff to do. I also played the night game contest, which is by far the easiest to manage, but also most competitive.

Once you figure out which contest to join, click on the contest from the menu to bring it up. Click join contest to get going. This will change the view so you can see the screen that will be home base for that contest.

The most important piece of the contest is your starting lineup which is at the top of the main contest screen now that you have joined. Click on that section of the page to bring it up, and it should take you to the play screen. This is where all the action for the game takes place, and you should memorize how to get back to this screen as fast as possible.

Huddle has a great set up that allows you to play thousands of times more than a normal fantasy lineup. You do not want to set your lineup and forget about it, unless you cant physically follow along with the games. You will need to switch out your lineup hundreds of times to be a top player, something that makes this game insanely addictive. 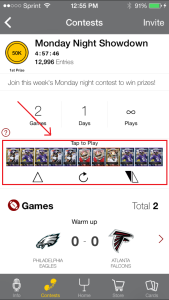 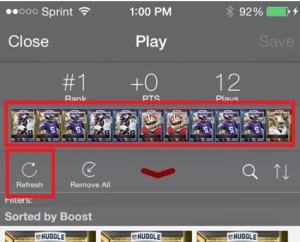 Its important to keep in mind that players will ONLY score points if they are in your lineup at the time the API loads the plays into the app. Right now, the app runs a few minutes behind live, maybe 5-10 plays in real time. So, if you are following along live like mentioned above, you will have time to load cards for a desired scoring play before it hits the app. If the player is on your bench when the points hit, you are out of luck.

To put a card into your lineup, go to the play screen, and from your cards pictured below, double click any card you want to add. If you have a bunch of other cards in play, it will overwrite your previous lineup automatically. If you want to start from scratch each time you load your cards (which I highly recommend if you have time), hit remove all.

NOTE: You can repeatedly hit the refresh lineup button from the play page to see if your points have accumulated. Once they have, move onto the next lineup you want to load for a particular scoring play. DO NOT SWITCH your lineup until points hit, unless you are comfortable missing those.

For any lineup, you can play up to 11 of any card, or combination of cards. So, if you have 11 Tom Brady cards, and he is the person you want to play, you should put all 11 in your lineup, starting with the top boosted card.

As a whole, for any given play, here are the best cards to play.

ANY PASSING PLAY – Play the person who caught the ball before playing QBs. Then play QBs. Receiving yards are worth more per play than passing yards. If you have neither QB nor Receiver to play, you can also play the defender who tackled the receiver.

ANY INTERCEPTION – Make sure you remove the QB from your lineup, because they will lose points for an interception that could wreck things. Switch in the defender who caught the ball. Do not play the person who tackled the guy who intercepted the ball.

ANY SACK OR SACK FUMBLE: ALWAYS play the guy who sacked the QB and recorded the forced fumble, NOT the guy who recovered the fumble, unless it is a touchdown. Then play whomever ended up scoring.

RETURNS: Kick returns and Punt returns score points. You can also play the guy who tackled the returner.

If Huddle has game only boosts released, they are a good idea to try to get. You want to make sure that you are aware that these boosts will only be good for one day, so dont break the bank in trading for them or buying packs. That being said, some are better than none, trust me.

These cards will score at a higher rate than the highest boost level available in the game, up to and including huge amounts of additional scoring potential. They are available in special packs on all game days.

You will not automatically be awarded your prize if you place in any contest. You have to go into the contest main screen, go to history, select the contest you played in and hit “claim.” This will add the coins from that contest into your account.

What does it take to win?

To win a contest, you need to have a lot of firepower. A LOT. The top player in each contest will score tens of thousands of points, so if you cant generate that with the cards you own, its going to be very difficult to win.

That doesnt mean the contest isnt worth playing, as there are prizes for basically everyone who plays. Any coins help, so dont sleep on these contests, especially with how little effort it takes to get something from them.

The nationally televised games arent a secret. You should plan ahead and stock up for teams that play more than just the mandatory Thursday game that everyone gets. Usually the better teams get a lot of national games, so that means their base and boosts should carry more value to your collection.

The app functions on a mentality that HEAVILY overvalues that day’s games, and I would do everything in your power to set up your lineup ahead of that timeframe. Dont get caught in the rush. You will overpay for cards you could have gotten cheaper had you planned ahead.

New User Tips is a running series on Digital Card Central – If there are any other questions you have about the nuance of the game, please do not hesitate to tweet me @SCUncensored or through a same card trade with a message in the game.

If you have ideas for future New User Tips – please let me know!