SWCT Force Tip of the Day: Are Force Awakens Cards the New Marathons?

Posted on September 15, 2015 by SCUncensored

The last 11 days have been a whirlwind of amazing looking content based on the upcoming movie release. I have loved every minute of it, as each card seems to be cooler than the one released right before it. With the movie still months away, im curious how the app will continue to build on the concept. The cards released have been extremely valuable, only heightened by how quickly they sell out. With Marathons wrapping up in the next month, its goes without saying that something will need to happen. Are these cards strong enough to be a replacement? 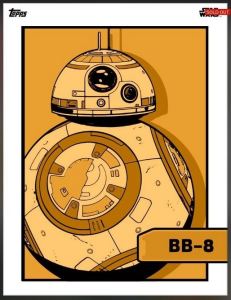 As a whole, Marathon cards have dropped in value since the third leg began. Many collectors are likely saying, “Well, if I dont have the cards now, its not worth chasing them down,” and that has hurt things for all the new users who came on board during that time frame. With tens of thousands of users on the hunt, and only a few thousand with any complete marathon set, its clear that the release of the Force Awakens cards is a new chase that everyone can love.

Additionally, it helps that the characters from the movie seem to be fully baked even before the film hits theaters. I feel like I know a lot about Kylo Ren, Finn, and Rey, even though we only have bits and pieces of their backstories. The Villains have always driven the franchise, and though people were complaining about the structure of his broadsword weapon, Kylo Ren is definitely cool in every way.

As for the content itself, most of it is based off of existing artwork and publicity from Force Friday and marketing materials. It should come as no surprise that everything looks as good as it does, because since the 1980s, that is what has made Star Wars into a global powerhouse license. Lucasfilms has a stable of companies on their license that create some AMAZING looking promotional materials, and its great that SWCT is taking advantage. This movie will be used everywhere from soup cans to baseball games, which means that the content has to be top quality. So far, it has been.

Here is the thing. We are all playing a risky game with this stuff, as there is a chance that the movie could turn out to be absolutely awful. JJ Abrams, in my opinion, RARELY fails at making entertaining films, so the track record should speak for itself. However, this is a treasured franchise, and that means rabid fans who will criticize every last minute of the movie. Im just hoping it turns out to be as awesome as we think it will be. If its not, the value of the cards could drop to match the reaction of moviegoers, but I dont think we are close to that point yet.

For right now, just bask in the glory that an insert can be released and sell out the same day, and that every card has been as awesome as it has been. We know there is more to come, and its only a matter of time before we get a full picture of what life is like after the original marathons are complete.