As expected, Huddle had a lot going on for the NFL draft, and I was glued to the app as I was watching all night long. The things they did ranged from a bit off the wall and fun to expected and awesome, leading to an all around great night. We arent done yet, and as they continue to get images from the draft, im sure more content will be released. So far, this has been a memorable event.

This one was something I was NOT expecting and seemed a bit odd at first. It turned into one of the most fun parts of the night, basically giving users a chance to do their own mock draft with cards pulled from special variant packs.

Not only did this create a feeding frenzy around the variant draft cards, but people were in the app talking about their starting 11 picks and who they were looking to capitalize on. One of the reasons I love the draft so much is all the prognostication, and this was a quirky and awesome way to bring it to Huddle.

Huddle had a similar program last year that I absolutely went nuts for. This year, they took it to the next level, using placeholder cards to get things into packs in live order of the announced draft picks. At 1:100 odds to pull ANY of the cards, these proved to be difficult pulls that had people clamoring to pick them up. After buying the 1.25 million bundle for cards like this, I ended up with 5, including Elliott, Doctson, Buckner, and Stanley. Easily my favorite type of card to chase. 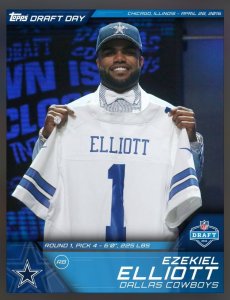 I would guess these are going to be some of the better cards of the offseason to chase outside of the marathons and with a 1 day timer, should end pretty low. If you are lucky enough to pull one, its going to be worth while.

The cards are not only going to be rare, but they are also not completed as of yet. They will feature photos taken on stage and elsewhere from the draft, and that is what will make them more special than what we have seen even last year. I love the look and I will definitely be in the market to pick up more, as it looks like they may do this for the second round too.

UPDATE: Players at the draft now have updated cards!

Road to the Draft Variants

To play in the contest, Huddle had special variants of the 20 card set that was in packs through this past week. The cards ranged from a white card in a cheap pack at 1x points per slotted pick, to purple cards that were in a 7k pack at higher odds. Almost all of the rarer cards finished super low, and I know people ended up happy if they were able to get some of the top pick’s cards in a variant that ended below 10. 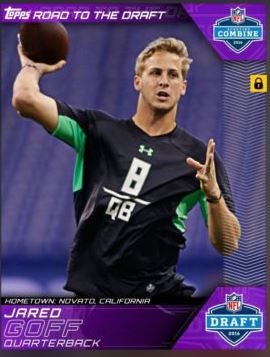 Value on these types of cards can be tough to determine, but with scoring manually assigned today, I would NOT trade any of the cards you used in your lineup until the entire thing is sorted out. Im sure this type of caution isnt necessary, but Im not risking it.

This was a fun chase to say the least, and its clear that many people wanted to stick with the cheaper packs to get more cards to play, instead of buying the bundle that included one of each color. I spent A LOT on this, and hit the jackpot on playing my Purple Heargraves at the 11 slot, getting me an absolute BOATLOAD of points.

Cant wait to see the prizes, hopefully sigs are involved.

On the Stage Set

I would be lying if I said that I didnt expect this set. We have gone from the combine to the road to the draft, and now the stage. I really like the progression in the set themes, all of which have been widely collected. As for the stage set, they released 30 cards with a Cam Newton sig as the award, making it a must to complete the set. 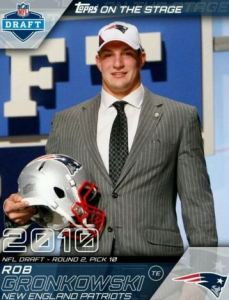 The individual pieces themselves are cheap, but because of the size of the set, hopefully the award isnt too high in count. We saw the Jared Goff sig from the 20 card draft set finish at just over 50, so I would guess this should be about the same.

In reviewing the set, I really like looking at all the photos, and how much things have changed since 2007 even. The cards bring a certain nostalgia for me, especially with my title as a connoisseur of fine NFL drafts.

What to Expect for the Weekend and Beyond

I would expect a few things, considering what was done in previous years and speculating on further progression of the “Draft Path” theme.

First, it looks like we might get a new batch of draft day cards today, with live cards delivered for round two as a possiblility, maybe closed to the players still at the draft in the green room. We could see other photos used if they are not in attendance, but they might not get cards if they arent there.

Second, I would guess that as team press conferences start, we could get cards of the events – especially if the picks themselves are high profile. We already know that the top guys should be introduced to the press today or tomorrow, so its possible to see that as a continuation of the Path.

Last year, Huddle released dual and triple variants, as well as gold cards of the draftees, which means that there may be additional cards that are released on the live draft card theme as the weeks progress. Obviously, these will be incrementally tougher as they become more valuable, so keep an eye out.

As the photos are processed and the rookies get more stuff for Huddle to use, there will definitely be more cards using their likenesses. Mini camps will be starting soon, and leading up to the Rookie Premiere in May, we could get a number of different sets.

Overall, this has been a great way for Huddle to continue their incredible offseason, and I cannot wait to see what is in store as we get deeper into the bigger parts of the pre-season process.