When I saw that Star Wars was going to be releasing both dual and triple signature cards, I was crazy excited. Being that physical cards have had multi signed examples for a long time, bringing them to digital is natural.

Even better than that, the way the cards look is really cool, especially the set of dual signatures that all can be collected for the Maul/Boba Fett award. I think that adding content like this is really a step in the right direction in keeping people engaged, and as long as the signatures stay rare and tough to get, their values will remain high, even if the counts get up into the hundreds. 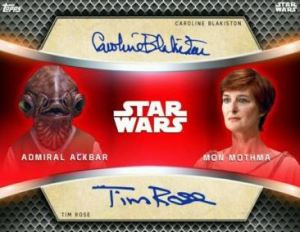 One of the main issue with the signature cards is that there are so many variants of them that the market is too diluted to support any real continuous value. Artificially creating demand with low count colors hasnt really worked all that great, and people are kind of sick of the single sig cards to the point that they are tough to trade away.

With the multi signed cards, its a completely different story, as the freshness of the idea has kept people going strong. Additionally, because there are no variants (yet), the demand is outweighing the supply by a considerable amount.

All of this is dependent on preservation of the novelty of the card, which will be sullied if they are handled in a similar manner to the single sigs, in my opinion. Although there might be a slight bump in daily revenue for the team to release a variant, the long term buying pattern of the public will change. I have a feeling that more will be lost long term if the team approaches this in the wrong way.

Because SWCT is more about the characters than the actors, save people like Ridley, Ford, Jacobs and Boyega, there is a weird connection that needs to be built to appreciate these cards. Obviously, a Finn sig card has appeal through both the character and the actor, but with guys like Boba Fett, that isnt as much the case. The cult status isnt applied to the actor, only the character.

That’s why the whole signature situation is as fragile as it is. People want to have access to cool content, and sigs are definitely that. But Im not sure that a sig of the actor behind Darth Vader means the same thing as a sig of Mike Trout, only because of what each represents to the user.

Bottom line, I really like the duals and triples, and hope we get more fun stuff like that. However, I also believe there is a lot of other factors to be considered – especially in the way users will be able to digest a bunch of releases.