Posted on September 9, 2016 by SCUncensored

The contests this year are taking an interesting approach from day one, and I am on board 100%, plus some. Not only are there the standard fantasy contest and daily contests, but there is now a week long contest as well. The unlimited play contests have contest cards as prizes, and they are easily some of the best looking prizes I have seen in any of the apps. We havent gotten a look at the Legend ones, but I would guess they wont be any less insanely awesome than the others. 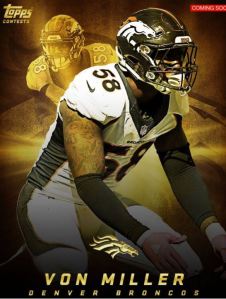 For whatever stupid reason, history hasnt been kind to contest cards. Even going back to the best of Huddle days, many of the prize releases didnt carry half the value that a pack pulled card had. To be fair, the community was never really treated to designs that they enjoyed, even though I thought last year’s were cool in their simplicity.

The one exception to the rule was the playoff signature ones from 2015, where many of the rewards had some serious trade potential, especially for top players. The signature versions of Tom Brady, Cam Newton (SB50), and Aaron Rodgers were easily 40 dollar cards, and still remain highly  collectible pieces. Other than that, good luck.

Hopefully this year will change, as the cards literally look incredible. I love the silhouetted player images and the sleek design is really something to behold. Par for the course for Huddle’s design team, as they have done some seriously amazing work.

Then to find out that for the week long contest, there will be a legend variant and a signature for the premium contest is something that takes this to another level. With the first Huddle card of Walter Payton on the way, im starting to wonder who else might be on their list of legends coming up. We have been getting the same 9 or 10 guys all offseason, hopefully this new list brings more epic names like Sweetness to digital for their initial offerings.

Contests are already hotly contested, and remain difficult to do well in, unless you have the goods. With boosted cards probably in the plans, this is only going to get more and more competitive. Thankfully the prizes look like they are going to reflect the effort that is required to do well in these day long grinds, and I hope the community will put these on a much higher value pedestal. These cards look good and are exclusive, but its up to the community to set value where they belong.