The Force is Strong: Discussing the Value Behind SWCT’s Biggest Cards

If you have been playing along with Star Wars Card Trader, you probably are familiar with the big three weekly sets in Vintage, Widevision and Connections. These three sets represent some of the most valuable cards in the game, and for Vintage, the sig equivalent to Bunt, Huddle and Kick. If you arent familiar with the trade economy, I want to spend a bit of time breaking down some of the bigger cards from each set. 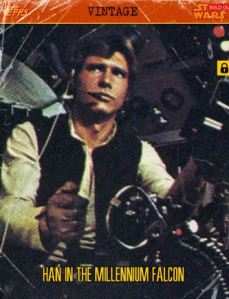 When this card came out, I remember saying to myself that this was going to be a fun set to collect. Although I wasnt enamored with the subject of the card, I knew all the first of the weekly sets would be the ones to collect. I picked up two, not understanding the firestorm that would follow. Right now, it is one of the more valuable REGULAR ISSUE cards in ANY of the four apps, let alone in Star Wars.

These cards are selling for an absolute ton on Ebay:

There are some reasons for it being so difficult to acquire. First, being that it is a first week card, the amount of people that pulled the card and didnt stick around is likely going to be pretty high. When you do a blind trade for the card, you will see that there are a lot of accounts that own one, but have zero trades and a low collection score.

The reason for this is simple – attrition. Although the app has become seriously popular, there are still people that downloaded the app, opened a few packs, and left. Their accounts still have the cards, as Topps never reclaims dead cards from old accounts. Because this was a 1:30 pack pull, the ease in which a dead account could have pulled one is pretty high. Similarly, Han is a very popular character in the most popular set of the game.

There is also a marathon award that you will be rewarded for collecting every card in the set, thus making it MORE valuable. As of right now, I dont know of any SINGLE card that can be traded for the Vintage Han, and there might not be one. The allure is just too high. 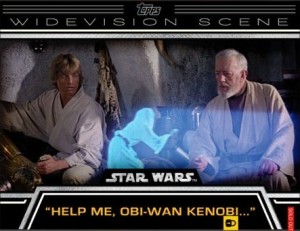 Like the Vintage Han, this was a first week issue, and is the rarest card in the set. Again at a very easy pull rate, the dead account theory still holds true. Unlike Vintage Han, this set isnt as popular as the the sig equivalent, but that is like saying that Rolls Royce is only slightly less valuable than Bentley or something like that.

The crazy thing is, I dont even think this is the coolest Widevision card in the set (Duel of the Fates anyone?), nor is Vintage Han. This card is just hard to come by, and the majority of active users who own a copy, have it on lock.

Unless you have an extra Widevision Obi, you are likely not going to be able to trade for a Vintage Han, as it is the one bargaining chip that remains on the table to be included in that deal.

This is easily my favorite of the Vintage cards, and its not even a competition. As the week 3 edition of Vintage, its not as valuable as some of the others, but it is easily the coolest looking.

Here is the thing with this card, as it is a bit odd. Because of the way Vintage was released, week 3 was the first time that people REALLY saw the value in collecting those cards. As a result, the collectors out there started to hoard the set pieces, opening a ton of packs of during the release, and sitting on their copies.

Battle in outer space’s value fell considerably, mainly because there are so many people out there with 3-6 copies of it. Although it is way more popular of a subject matter, the Vintage Tarkin remains a bigger deal. This is in spite of a similar card count and a similar value to the set. Additionally, in week 3, user attrition was more stabilized, making a significantly higher portion of the print run still with relatively active accounts.

It has been this way since week 3, and the Vintage cards have become relatively interchangeable since that time.

Widevision Collection: Duel of the Fates

I love love, love, this card. Love it. Its a memorable scene from Episode 1, despite the general work being the worst of the 6. Maul is a popular character, and the music alone makes this a card to have. I wish it would play each time you looked at it, as that would really complete the whole experience. That being said, its relatively surprising how much value this card still has.

As the week 2 Widevision release, there are more in circulation than Obi wan, but it is still tradeable for some of the rarer Vintage cards regardless. Of all the weekly sets, I am a huge fan of the Widevision releases, as the horizontal approach really allows for a cool looking card. I cant wait to see what they have in store.

Another favorite of mine, this is one card where things changed a bit for the Vintage collection. First, this card had longer odds than any of the other releases in the set. Instead of the normal 1:30 packs, this was 1:75 packs, making it quite difficult to hoard in the same way it was with the previous examples.

Adding in that it is 1750 copies instead of the normal 2000, makes this quite the card to chase down a few copies of. Guaranteed, there will be a VERY rare vintage collection card right before the award in week 10. Its the reason the hoarders are doing what they are doing. They need to protect themselves in case something crazy happens. If you have played the other games, it is almost a certainty that there will be a 1000 copy vintage card coming. That will be a fun day, indeed.

1 Response to The Force is Strong: Discussing the Value Behind SWCT’s Biggest Cards