I love this part of the year in any of the apps, as it is still new and fresh. Every insert has expedited increases in value because there just arent many out there, and that rush still comes with each one you pull. Bunt has had a lot going on over the last few weeks, and here is a quick breakdown. 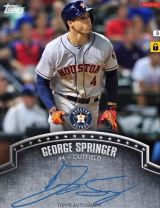 I love chasing sigs. Its a second past time for me outside of playing, and with the new structure of daily contests, maybe even more so. To follow up Mike Trout with George Springer is a bit of a dropoff, but that’s only because Springer is such a new talent in the league. He has played well so far, and looks to have a bright future ahead of him. If every team is going to get a sig, Springer is a good choice for the Astros. Just not sure if I would have brought a little more popularity firepower with the second sig release. Player selection will be a hot topic in this post, and for the record, I am all for venturing off the beaten path. Lets just get established with the more popular players first. Then, when we start to get a bit tired, add some fun.

The first Limited card released this year was Madison Bumgarner, who was definitely the right choice to lead off the chase. As for Kung Fu Panda, the second member of that Championship team? Not so much. I get his signing was made to be a big deal, but outside of the World Series, he hasnt been a shining star. Considering that popularity and rarity drive value among these inserts, Ill give the team a pass, but im NOT a fan of player selection for the second in the series.

I loved the nickname series design originally, and it continues to look awesome. However, the pic chosen on this card is so incredible, that it just makes it that much cooler. This card turned out to be extremely rare, and it looks like its trading quite well as a result. I dont think I have seen the black packs have its own special insert in a while, so this was cool to see. 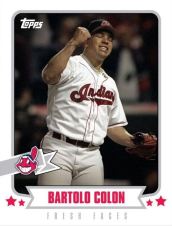 I really like this series, but as I have mentioned with the previous few series based cards, I am just not a fan of the player selection here. It should go without saying that not every card can be Trout or Kershaw – and SHOULDNT be Trout or Kershaw, but Bartolo Colon is a bit far down the list of players I would like to have associated with the launch of this app. The set is already trading a bit low because A-rod is the reward, but it is what it is. The design is awesome, and the card does look cool. I probably would have gone with David Ortiz or something like that just to get established before diving into the deep cuts. I know I am going to get lit up for player selection complaints, but Colon has always been a villain to me, and not because he has been a good pitcher. The value we are seeing him trade at is reflective of that status.

From the Vault – Kenny Lofton

I love that this series is all going to be the 1985 Topps Design if it continues this way, because the cards look amazing. Kenny Lofton was one of the top guys in the league when I was growing up, and its cool to see him get his first card. The pic is perfect as well, as Lofton running from base to base was a nightmare whenever he was able to get on board. I would have liked to see Griffey or Frank Thomas maybe before a guy like this, but I like Lofton more than someone like Colon as a deep cut. He was fun to watch, and a fan favorite, which adds a bit of a bump to his value.

Really great set here, no ifs ands or buts about it. The checklist was great, the design looks incredible, and the rarity plays well. I chased down a few of these cards, as I really think they are some of the better looking retro cards from the physical side of the business. Last year, this set got lost somewhere in between Ginter and the others, but this year, I feel like it is much better.

Another transfer from Topps Series One in regular cards, and its a perfect set to bring over to bunt. Large checklist with a lot of top names really helps. I think that the series itself has an okay design, but it looks much better on Bunt than it does when holding the cards in hand. It kind of gets lost a bit as Gypsy Queen looks much more dynamic and cool. Some first 2015 cards for guys like Sale and Iwakuma will do well. Other than that, the cards havent traded well.

When I saw that they had found a way to get this series over to digital without issues on the rights to the likenesses of the non-sports subjects, I was pumped. If you are not a physical card collector, this set created a ton of buzz when it was first put out, and the sets really did sell very well. I chased down a number of cards from this one, as who wouldnt want an Eddie Vedder card? How awesome is that. Considering the cards are pretty high count, they have traded well, especially the more popular musicians.