There are really a few big comic conventions each year, some of which are more important than others. One of the biggest of the year, is San Diego Comic Con, which is the one that all the movies and franchises run their publicity through. Another big convention is in New York each year, and though it doesnt get as much pub, it is still a huge event. Being that Topps is stationed in New York City, this is a perfect event for them to attend in support of their digital apps.

First off, if you see the pictures they posted on social media, you can see just how much work they put into their setup. Not only does it look sleek and high tech, but it also showcases the investment Topps is making in their digital portfolio. I have never seen a card company dive so deep into a platform before, and just seeing the amount of money they are going to invest in convention setups is incredible. The booth looked beyond awesome, and I am sure they stuck out in a good way on the show floor.

Secondly, a few SWCT themed partnerships came out of the weekend, with the first being actor related, and the second being SW universe related. Ill start with the actor one, because its someone that I think was a great partnership to form. Ashley Eckstein runs a clothing company called “Her Universe” which focuses on sci-fi themed wares that are aimed at enthusiasts. She also voices the popular character Ahsoka Tano on the cartoon series, which might be the only non-movie based creation to really take off in the app.

As someone who is a force on Social Media with SW fans, a partnership with Eckstein serves to be very beneficial. Ahsoka is a powerful female force in the SW universe, and that plays well with fans in the app. This might mean that more cards based on the characters Eckstein voices, as well as the possibility of using her likeness as a person for Signatures, much like Billy Dee Williams. 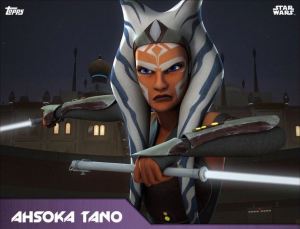 As for the Del Rey Books partnership, I also see a lot of potential there, as they are responsible for some of the more important works that bridge the gap between ROTJ and the Force Awakens. We have already seen an AWESOME Death Star themed card released during the show, and it has been very difficult to trade for. When Battlefront cards were announced at SDCC, they became way too easy to pull, and all the value was sucked out. With the Aftermath card, its a completely different story. At 2500 copies, its on the lower spectrum of insert value, and the design makes it popular.

Anytime we see a partnership like this, it opens the door for a lot of content if used the right way, and Del Rey has a wide range of books and covers to make into cards. The fans are pretty familiar with a lot of those stories, as they have been deemed canonical in some cases. Because of the rabid nature of acquiring SW knowledge for fanboys that populate the app, this could be a very fruitful deal indeed. Even more so if more novelizations are planned leading up to December. 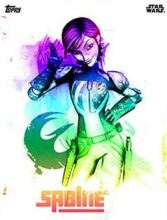 We also got more Star Wars Rebels cards leading up to the new season of the show, and they included a bunch of really cool hyper color variants at lower pull rates for people who were at NYCC. The other variants of the cards seemed to be of normal value for cartoon based inserts, but people REALLY liked the cool effect from the hyper colors, making them significantly more valuable.

As a whole, this app is turning into quite the juggernaut for Topps, as its clear that the fan base is so hungry for content, that it almost doesnt matter what the cards are about. It sure doesnt hurt that each release has been so awesome, with new pack delivery methods and set building situations that keep things fresh. The app has changed recently with the introduction of Smuggler’s den, but it is looking like the absence of the main marathons (now that they are over), isnt effecting much of the daily traffic.