Yesterday was an interesting day in Huddle, especially when it comes to the release of Purple Boosts. These cards score at 2.2x, which is currently the second highest perma-scoring cards in the game. There are a few set rewards that score at 2.5x, but they are not able to be pulled from packs. Because of what happened last year around this same time, people are getting curious if things will go nuts like last year. Here are some thoughts.

Around week 2 of last year, Huddle lost the ability to produce action shot cards. In the announcement discussing the change, there was a commitment to focusing on the gameplay side of things. Over the next few months, Huddle released hundreds of boosted base cards in all sorts of colors and patterns, to replace their ability to give a lot of variety in player photo subject matter. The community has affectionately called this situation “boost mania,” as it was clear that Huddle went kind of nuts. I discussed it in depth here in my 2014 year in review.

Whether it was a positive experience depends on who you ask, as many users (including myself) dove head first into the gameplay and had a blast during 2014. Others decided the app wasnt fun with so much commitment to the boost culture and decided to go a different direction.

If you were around in 2014, you know this isnt 2.0. It isnt even close. That being said, I am excited that Topps has started to embrace the Huddle community’s love for playing contests, and given people more options for high scoring cards. Gameplay is a big part of Huddle and rightfully so, as NFL fantasy continues to be a BILLION dollar business overall. That means more people who come to Huddle will be open to the fact that Thursdays, Sundays and Mondays are going to be spent in front of the TV, in some capacity. 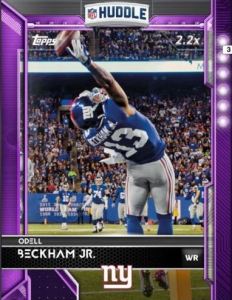 That’s not saying that Topps is abandoning the collecting side of things – as we have seen with the launch of Legends, and other HIGHLY collectible series. I would scoff at anyone who thinks that embracing both sides of the aisle is a bad business move, despite the connotations with 2014 it might invoke.

Its obvious that gold cards of elite point scorers are more valuable in Huddle than they ever were in any other game, and that should not be surprising. To offer even rarer cards that have higher boost levels in packs is only going to incite a feeding frenzy among the people who want those cards for their lineups. This is exactly what any business wants to do.

To see that the new NFL license ALSO provides them the opportunity to produce collector focused cards without limits, showcases how much different 2015 is than 2014. Inserts and other rare cards werent dead last year, but lets face it, this is a completely different ball game.

Im still puzzled as to why they went 2.2x instead of 2.5x like Bunt or even 3x to match the game boosts. The article may say these are “One of the highest scoring cards that will score the whole season that can be pulled from packs”, but that doesnt mean they are THE highest scoring.

Knowing the way the Huddle producers think, they likely put this line in the article for two reasons. 1) Playoffs cards will score higher, and 2) there could be higher boosts coming later. Right now, there really isnt a need to go nuts like last year, but that also doesnt mean there isnt money to be made.

Right now, the Beckham Purple is the most valuable in a gameplay sense. Although Hyde, Miller and Weddle are all considerably rarer, they have maybe 1/4th the potential to score points as Beckham does. If you are looking to trade for the other three, its likely you are just going to pay for the rarity – as they are some of the rarest cards available currently. Miller in the mid 50s for card count is insanely low, and that could be interesting later on.

Any of the purple boosts will take some major firepower to acquire, especially with so few 2x plus scoring cards available at the moment. Remember, with only 11 more games to play per team, you know people are going to want to stack their lineups as quickly as possible. This isnt like baseball where the boosts can be used close to 100 times.

I hope they continue to release a few each week. I really do. Its fun, the cards are valuable still and nothing is getting watered down. The second they start putting out sets that overshadow the game boosts, then I might have an issue.

To me, the game only boosts are something that needs to retain value to the general collector. When sets start coming out, things get completely out of whack – especially if the cards are released on Thursday or Monday night.

If they want to do one card per team on those nights, I think the perception of the release changes from completely “UGGG here we go again!!!” to “Hmm, I might need to buy a few packs here.” If they eventually flood the market, everything goes to hell, and I start looking to go on eBay to buy things instead of buying from the pack store. I would hate to see that be the case.

As with all the Topps apps, things change drastically in short periods of time. We still have yet to see the introduction of a “Smuggler’s Den” type feature, which could play in big for boost type cards. THAT would be something I would be interested to see how it works out, especially if Huddle uses it the right way.